Watch: Prius, cyclist spared from tractor-trailer thanks to ZF OnGuardMAX

A tractor-trailer versus a Prius and then a cyclist would have been absolute carnage if not for ZF’s latest OnGuardMAX Autonomous Emergency Braking System.

CCJ Senior Editor Tom Quimby recently rode along with ZF field service team leader Chuck Brodie at the Transportation Research Center in East Liberty, Ohio to see how ZF’s third-gen OnGuardMAX would enable an International LT to stop just short of striking the mock Prius and next a crash dummy atop a bicycle.

As Brodie explains in the video above, ZF’s newest OnGuardMAX can now apply truck brakes up to 50mph to avoid collisions with other vehicles versus the prior version, OnGuardACTIVE, which kicks in at 20mph and below.

OnGuardMAX can also automatically stop a truck in busy urban traffic where vulnerable road users like pedestrians and cyclists pose a risk.

“The previous system wouldn’t have responded to that at all,” Brodie explained.

ZF expects to roll out OnGuardMAX during the third quarter of 2023.

Contents of this video

I'm Chuck Brodie, field service team Leader for ZF. We are in an International LT and we're going to do a demonstration of the OnGuardMAX product. We're going to do two runs. First one will be with a stationary car, and for that run we're going to approach at approximately 50 miles per hour and you'll see how the system reacts and stops the vehicle before contact with that stationary object. And then for the second run, we're going to show what we call a vulnerable road user. And vulnerable road user is a term used to describe a pedestrian on a bicycle or pedestrian walking in the path of the truck. For that run, we'll be going a little bit slower because that relies on the camera alone to make that determination and we're going to approach that object at approximately 20 miles per hour.

So the haptic warning is actually a lighter brake application. Well, it's going to happen as we come around the corner and line up with the stationary car. The radar is going to see... It's going to essentially see that car because of the radar reflectivity of it, and the camera will also see it. Both of those systems will agree that it's something they need to react to. And once that occurs, the system calculates how long until we're going to be in a potential collision with that object. And using all of that information, it's going to decide when to provide an audible alert to me. So the first thing I'll see is a audible and visual alert. So the screen will show a red warning to tell me there's a collision threat ahead and you'll hear beeping. Shortly after that, we'll get into what we would call the haptic event, which is going to be a lighter brake application. And the system is going to be continuously calculating our deceleration rate versus how far away that object is, and it will decide that it needs more braking to prevent an impact with that vehicle.

So you'll feel the braking actually increase. And if you're looking at the video, you'll see us kind of moving further forward in the seats as that breaking steps up to the higher level. At that point, we're going to be experiencing a little bit more than half a G. For the technical people out there, it's going to be a six meter per second square deceleration.

There's been a lot of changes over the years. This is kind of our third generation hardware. We've had... In our second generation hardware. We've had several different versions of software, updates and improvements. Big improvements are exactly what we're going to show you here. With the prior systems, this maneuver, we would be doing it at approximately 20 miles per hour and you'll see that we're going to do this run at 50. The prior one that was on this truck, OnGuardACTIVE, we would've had done this run at approximately 20. So you'll see a major improvement there. And then when we do the approach on the vulnerable road user or that bicycle, the previous system wouldn't have responded to that at all. So we're at 50 miles per hour right now. I have to make a little turn here to get lined up with the approach.

So that was 100% system reaction. I have still not touched the brake pedal. I actually feel the truck kind of rolling backwards a little bit because we're on a very slight incline. So again, that was the camera and the radar. Both saw that object. They both decided to react to it with enough confidence to come in with that high level of deceleration.

So for the next run, we're going to approach the vulnerable road user, or if I can throw out the acronym, VRU. I think we've introduced that. So we'll approach that. Again, this is going to be at a slower speed because we can't really rely on the radar to track this object and it's going to be the camera that's making the decisions for that. So we'll do this approach at 20 miles per hour.

So that's the vulnerable road user. And you noticed that was a little bit lower level of deceleration or a little less of a brake application. But this portion of the system is designed for urban environments where you're driving through city and there's pedestrian traffic around. Maybe the driver's distracted trying to figure out where he is going. And the system can respond to these other objects that typically the older systems would not respond to. This tractor has the Wabco Maxxus 2.0 disc brake on it, and the trailer has drum breaks on it. Testing is very specific, right? The test guys don't just come out and do these runs over and over. What happens is, for each version of software that comes out, there's a list of tests that need to be done and they run those tests, they find something that isn't quite as it should be, then we get another version of software. So it's a test developed, test developed kind of process.

There are a number of other maneuvers that need to be done too, such as moving vehicles. So there's tests that done with moving vehicles, which is part of the system that we were demonstrating years ago, back in 2013. So we're showing kind of the exciting new features here where we have this higher de-cell and the vulnerable road user and the stationary car with the high de-cell. But there's a whole list of specific tests that need to be done before they can release the product.

There's also application tests to make sure the product's working correctly on the truck. So that said, there are days when there's a lot of runs done and some of those tests are done bobtail, lightly loaded, and fully loaded. So 80,000 pounds doing these exact same maneuvers. Can certainly provide a little bit of wear on the truck, but we maintain the trucks and do what needs to be done.

I'm working with the test guys myself and we ran 80,000 pounds and the system still from these exact same speeds did stop. It stopped with a very similar distance on the vulnerable road user and it might've been slightly closer on the stationary car, but it's still a very similar distance. It was actually, if anything, it was a little smoother with the heavier load on it. 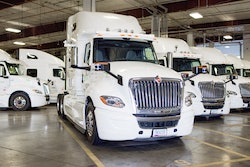 TuSimple says it has orders for nearly 7,000 driverless trucks