Softly humming the “Backhaul Blues,” doubles driver John Doe peered intently through a veil of rain that somewhat limited his view of Pennington Parkway, a four-lane highway with a grassy median, posted at 65 mph. Due to the inclement weather, Doe was cruising at 45 mph in the far right lane. Traffic was light. The time was 1 p.m. Reaching for his Thermos, Doe took a swig of the cocoa and coffee mix and … what the heck?

Dead ahead, looming out of the mist, was a battered straight truck – laden with a towering tarped load of Heaven knows what – crawling along at 35 mph. After skillfully executing a passing maneuver, Doe was still in the inside lane when … Holy Monica! What is this darn fool doing? Rocketing wildly across the median from a side street, a 1971 Mercedes sedan driven at full throttle by beer-crazed teenager Billy “Burpy” Clydesdale was poised to merge with the left fender of Doe’s tractor!

Armed with the reflexes of a cobra, Doe spun the wheel to the right, averting a collision but … Yikes! CRASH!!! Alas, Doe’s rear trailer had succumbed to a crack-the-whip scenario, and now rested on its side in the ditch! Unscathed, Clydesdale’s Benz disappeared into the distance, trailing blue smoke.

Since Doe contested the preventable-accident warning letter from his safety director, the National Safety Council’s Accident Review Committee was asked to render a final decision. NSC promptly ruled in Doe’s favor, noting that he’d avoided being sideswiped and couldn’t have anticipated Clydesdale’s attack. 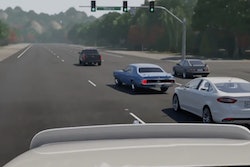 Driver clipped in motorist’s cross-lane turn — Preventable or not? 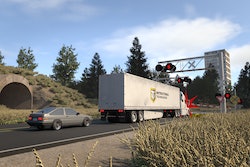