Trucker John Doe was bee-bopping along in the right-hand lane in the outskirts of Toad Suck, Arkansas, on a clear morning when up head noticed a sign; "Conway. Exit Only."

The right lane was the off-ramp to State Route 60. Doe is a regular at Conway hotspot Jack's Ultra Sports Paintball & LaserTag, but he didn't pack his gear in the bunk on this trip. Doe flipped the turn indicator and slid his rig into the left lane to continue on his way.

In his mirror, Doe sees a car quickly approaching in the right lane. Noticing the the lane was about to veer east, the car blows by Doe's truck and trailer before swerving into the left lane and speeding away.

"Idiot slow trucker! You got no business riding around in the fast lane," screamed Crosby Stills, driver of the red Oldsmobile Toronado that narrowly missed clipping Doe's bull guard while giving him the ol' one-finger Arkansas howdy.

Doe was flabbergasted by both the aggressive maneuver and finger. He was only in the left lane because the right lane was peeling off. In his dismay, Doe failed to see another car coming along the right side of his rig just as the exit lane was... well... exiting.

The fleet manager cited Doe for a preventable accident, saying Doe should have been more alert of his surroundings. Since the lane was ending, he said, there was always a possibility a car was going to attempt a pass and switch lanes at the last minute. Doe appealed to the National Safety Council who agreed with the fleet manager, adding that the behavior of the first car should have put Doe on high alert for similar behavior as he approached the end of the right-hand lane. 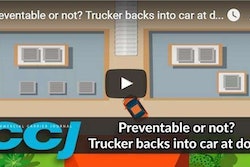 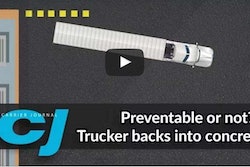