During the first five years of his marriage, Rob Hatchett and his wife attended an annual marriage retreat where they received assignments to have conversations about a given topic, like money.

In a TCA webinar titled “Is Raising Pay the Way to Boost Recruiting,” Hatchett’s top takeaway for carriers is to have regular conversations about driver pay packages, but more frequently than his annual marriage retreat. Hatchett, who has worked in driver recruiting for almost a decade, recommends carriers have a sit-down meeting among departments at least every six months to review market conditions, retention rates and other factors that contribute to driver pay rates.

“I like to treat driver pay like going to the dentist. There are a lot of things in life that we're told we need to have: a six-month checkup, the dentist being one of those … After we do that two or three times, we start thinking, ‘Why am I even going to the dentist. Every time I go it's good, and they're not finding anything.’ It's very easy to stop going to the dentist,” he said. "I personally had that happen two weeks ago. I hadn't been in two years … and I had a cap fall off. When you don't do regular checkups, you're just waiting for something bad to happen.

“I would encourage any carrier out there to put a calendar invite on the calendar for anybody involved every six months … It gives us a chance and a healthy environment to go, ‘We may need to make some tweaks,’ because if we don't have these checkups, we're just waiting for somebody to get upset, or we're waiting for us to get behind, and all of a sudden we're behind the market, and we hadn't even talked about it in two years.”

There are multiple areas he suggests spending time discussing – not just pay alone but the whole picture from benefits and home time to predictability, labor (loading, tarping, etc.) and work/life balance. And all of this culminates in a single question: do drivers value the job the carrier is offering?

“You have to consider the whole package because pay may get them through the door but may not be enough to keep them,” Hatchett said.

He said drivers are looking beyond the pay rate as a number to whether it’s predictable. The same goes for home time, he said, because drivers want predictability so they can plan for things like doctor appointments and family engagements.

A carrier can increase its pay rate, but if that work-life balance isn’t there, retention may suffer despite high recruitment.

But pay is often the biggest piece of the puzzle, Hatchett said, and money conversations tend to be awkward.

“I'll never forget the first fight with my wife was over money. I went and bought a whole life insurance policy. I thought that was a good planning technique for my wife and I, and I found out after I purchased that that she did not think that was a good financial planning technique for us. Neither of us were right or wrong. We obviously just had a difference of opinion, and it was awkward,” he said. “That very thing can happen in trucking companies, especially as we're talking about driver pay, where we get into this group wins or that group wins versus being able to come together and collectively make a decision on something we have different opinions on.”

The recruiting department has an opinion because it wants the most attractive package possible to get people in the door; the safety department has an opinion and maybe wants to incentivize drivers with additional pay to operate more safely; but the sales team has an opinion too because it has to compete to get the freight business that brings in the pay to begin with; the operations team wants a say because it’s in charge of retaining those drivers and may want to incentivize the drivers who remain with the company the longest or have the best utilization rates; and then you have the C-suite preaching profits.

“These different opinions are not right or wrong … but we have to be able to communicate and come up with a good decision, especially when the market is moving so much,” Hatchett said. “If the market is just staying the same, we can just create one pay package, and we're done. But as the market is moving, we're having to have these conversations on a regular basis.”

He said carriers have to keep up with the market to remain competitive among other carriers and attractive to drivers. And the market has been volatile in recent years with the Covid-19 pandemic and the residual effects.

After the initial shockwaves of Covid that sent people scurrying from the public, the economy started moving again but in a different way as consumer practices changed to reflect stay-at-home orders, resulting in more ecommerce, which increased the demand for truckload capacity and drivers.

During that time, Hatchett said carriers approached pay in three different ways: the 10-cent leap in which some carriers opted to do a big pay increase because they were confident in the demand for capacity; the 2-cent shuffle for the carriers who maybe weren’t as confident in the market; and the carriers that held firm with their pay rates. Many carriers also have begun implementing guaranteed rates.

But now, the market is turning.

In recent months, demand for capacity has lessened, market rates have declined, and the pipeline for driver talent has increased exponentially, Hatchett said.

“The industry as a whole has raised pay. It's been very well documented,” he said. “Well, we've raised pay enough that I think people outside our industry have started valuing our industry more.”

And while he declined to make any predictions about the future of the market, he said all these factors are coming into play to change driver pay packages.

In addition to the supply and demand of drivers, other factors he said to keep in mind include availability of driver trainers, retention, supply and demand of freight, the utilization rates of a carrier’s assets, other carriers’ pay rates and equipment availability as supply chain issues continue to affect production of new trucks and replacement parts to repair broken down trucks.

It's like a game of chess, he said, with all these moving parts ultimately affecting driver pay.

With the market constantly moving, Hatchett said it’s important to consider not only the number your carrier is putting out there and how it balances between recruitment and retention but also how it’s presenting that number.

According to a survey by Professional Driver Agency and Conversion Interactive Agency, owner of Fleet Intel, 55% of drivers want the pay rate in job postings to be presented as guaranteed weekly pay while 26% preferred per-mile. Hatchett said COVID resulted in a big shift from CPM to a guaranteed pay rate, though CPM remains prevalent and relevant.

“Be careful because if you guaranteed a rate a few months ago, now rates are going down and utilization is going down, but you still have to meet that guaranteed pay rate somehow,” he said. “A lot of times, if rates go up, it’s harder to hire; if rates go down, it’s easier to hire.”

And in the past few months, Hatchett said it has been a little easier to hire compared to the past few years. That means carriers can look at changing that pay rate guarantee and maybe get rid of some bonuses, as many carriers have recently been moving away from sign-on bonuses, although he said they can still be effective in recruiting.

As opposed to sign-on bonuses, Hatchett said overall drivers are more concerned with base pay and the driver package as a whole.

“The better the overall package," he said, "maybe you don’t have to pay as much.” 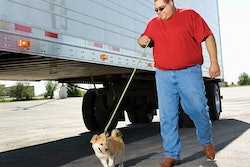