“NHTSA has continuously developed crashworthiness standards for automobiles and light trucks, but to date has generally not applied crashworthiness standards to commercial trucks,” the two groups wrote in a June 6 letter to David Strickland, NHTSA administrator. “We believe there may be opportunities to enhance the survivability of professional truck drivers if appropriate research-based uniform standards are developed.”

ATA and OOIDA highlighted the need for improving cab structure and occupant restraints such as safety belts and airbags, strengthening windshields and doors to prevent occupant ejections, and installing more forgiving interior surfaces. “Our organizations believe that improvements in truck occupant safety can be achieved,” the letter concluded.

“Making our highways safer, especially for our drivers, is one of ATA’s highest priorities,” says Bill Graves, ATA president and chief executive officer. “ATA has made setting crashworthiness standards a part of our progressive safety agenda, and we’re proud to stand with OOIDA in calling on the federal government to take these important first steps that will reduce injuries and fatalities among America’s professional truck drivers.”

Todd Spencer, OOIDA executive vice president, says his group is “more than glad to join ATA in making this request to hold the safety of professional truck drivers to as high a standard as all other motor vehicle users. The most valuable, even most precious, cargo truckers haul is themselves, and it’s time that our standards reflect that value.”

In testimony before the House Small Business Committee Subcommittee on Investigations, Oversight and Regulations, James Burg, president of James Burg Trucking Co. and member of the American Trucking Associations’ board of directors, said proposed changes to the federal hours-of-service rules were unwarranted and would harm small businesses nationwide.

“These changes, if finalized, would have a profoundly negative impact on small businesses, would restrict productivity and would result in greater congestion and increased emissions,” said Burg during a June 14 hearing.

Burg said that if the changes proposed by the Federal Motor Carrier Safety Administration were to take effect, his 75-truck fleet based in Warren, Mich., would need to “add additional trucks and drivers – and their corresponding expenses – simply to counter the loss in productivity.

“By estimates, we would need to increase our retained earnings by between 20 percent and 25 percent just to maintain our current level of financial stability,” said Burg, who added that productivity losses also would “likely be felt by small business shippers, manufacturers and retailers in the form of increased costs.”

Burg said increased costs and reduced productivity that would result from changes to the HOS rules would prohibit his company from investing in onboard safety-based vehicle technologies.

“FMCSA’s proposed changes to the hours-of-service rules are unnecessary and unjustified,” Burg said. “Both safety and compliance have improved under the current regulations, which have been time-tested since 2003. In contrast, FMCSA’s proposal to replace these rules with an untested set of regulations leaves safety to chance.”

* Maine Gov. Paul LePage signed a new law that prohibits texting while driving, and Nevada Gov. Brian Sandoval signed a new law that prohibits talking or texting on a cell phone while driving. The laws make Maine and Nevada the 33rd and 34th states to prohibit texting behind the wheel. Under the Maine law, which takes effect in September, violators will face a minimum fine of $100. Under the Nevada law effective Jan. 1, 2012, violators will face a fine of up to $100 for the first offense, up to $200 for the second offense and up to $250 for the third offense; third-time offenders also can have their driver’s licenses suspended.

* FMCSA and its state and local law enforcement partners conducted more than 3,000 surprise passenger carrier safety inspections over a two-week period that resulted in 442 unsafe buses or drivers being removed from the nation’s roadways. The strike force issued out-of-service citations to 127 drivers and 315 vehicles during the unannounced inspections that took place from May 1-15.

* The Pipeline and Hazardous Materials Safety Administration and FMCSA have approved the use of the National Fire Protection Association Standard 498 – “Standard for Safe Havens and Interchange Lots for Vehicles Transporting Explosives (2010 Edition)” – for the construction and maintenance of safe havens used for unattended storage of Division 1.1, 1.2 and 1.3 explosives.

Burping from a free giant veggie pizza awarded by Bubba’s Truck Stop for buying 150 gallons of fuel, tractor-trailer driver John Doe was eastbound on the turnpike near Greensboro, N.C. It was 10 p.m., the sky was heavily overcast, and the turnpike was as dark as the inside of his diesel’s crankcase. In preparation for making a U-turn at the intersection with Grits Road, which was dead ahead, Doe moved into the left lane, actuated his left-side flashers and started to brake.

As John Doe attempted a wide U-turn from the left lane, he struck a car that had pulled up next to him in the right lane. Was this a preventable accident?

By the time Doe had stopped at the intersection, the traffic signal in his lane was red. That gave Doe time to extract a rice cake from his survival rations (he was watching his weight, after all), adjust the squelch on his CB and glance at the adjacent lane via his right-side West Coast and convex mirrors, which at that time revealed nothing.

Seconds later, while the traffic light was still red, Tommy “The Duke” Gripley became weary of staring at the rear of Doe’s trailer and began maneuvering his dark blue 1957 “Heavy Chevy” into the right lane, next to Doe’s saddle tank. When the light turned green, Doe quickly started to turn, his rig extending into the right lane to complete the maneuver when … Sproing! Oh no! The 48-foot trailer’s ICC bar had encountered the Chevy’s left front fender!

Because Doe contested the preventable-accident warning letter from his safety director, the accident was turned over to the National Safety Council’s Accident Review Committee. NSC upheld the preventable ruling, concluding that – despite Doe’s claim that the Heavy Chevy had materialized from thin air – Doe had not checked his mirrors adequately. Also, attempting a wide U-turn at a dark intersection on a high-speed road wasn’t exactly a safety-award-winning idea, either. 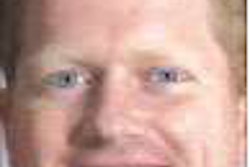 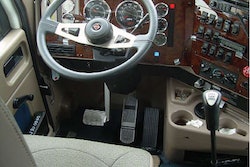 Who’s in the Driver’s Seat? 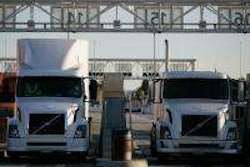 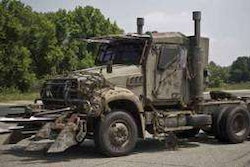