Work trucks, buses and other heavy-duty vehicles will, for the first time, have to trim fuel consumption and greenhouse gas emissions under new efficiency standards. The White House says the standards – which apply to vehicle model years 2014 to 2018 – will save businesses billions of dollars in fuel costs, help reduce oil consumption and cut air pollution.

The new targets announced Tuesday, Aug. 9, by President Obama affect three categories of vehicles. Big rigs or semis will have to cut fuel consumption and emissions by up to 20 percent. Diesel-powered heavy-duty pickups and vans will have to cut consumption by 15 percent, or by 10 percent if the vehicles run on gasoline. The standards also will mandate a 10 percent reduction in fuel consumption and emissions for work trucks such as concrete mixers, garbage trucks, fire trucks and buses.

Within each of those categories, more specific targets are laid out based on the design and purpose of the vehicle, providing a flexible structure intended to allow serious but achievable fuel efficiency improvement goals charted for each year and for each vehicle category and type. The administration released no mpg equivalent for the new standards, saying that doing so would be confusing given the different categories of vehicles, the different types of vehicles in each category and the varying payloads that each one carries.

The U.S. Environmental Protection Agency and Department of Transportation projected savings of $50 billion in fuel costs and 530 million barrels of oil over the lives of the vehicles covered by the new standards, along with improved air quality and public health. The higher costs of the more fuel-efficient trucks – likely to boost the cost of a truck by an average of more than $6,000 – will be returned through reduced fuel costs of about $73,000 over the lifetime of the vehicles.

“Thanks to the Obama administration, for the first time in our history, we have a common goal for increasing the fuel efficiency of the trucks that deliver our products, the vehicles we use at work and the buses our children ride to school,” said U.S. Transportation Secretary Ray LaHood. “These new standards will reduce fuel costs for businesses, encourage innovation in the manufacturing sector and promote energy independence for America.”

The National Highway Traffic Safety Administration and EPA first announced their intentions last fall and developed the standards in coordination with truck and engine manufacturers, fleet owners, the State of California, environmental groups and other stakeholders. “This administration is committed to protecting the air we breathe and cutting carbon pollution – and programs like these ensure that we can serve those priorities while also reducing our dependence on imported oil and saving money for drivers,” said EPA Administrator Lisa Jackson. “More efficient trucks on our highways and less pollution from the buses in our neighborhoods will allow us to breathe cleaner air and use less oil, providing a wide range of benefits to our health, our environment and our economy.”

Daniel Ustian, chairman, president and chief executive officer of Navistar, commended the government agencies for “developing one single national standard for GHG and fuel efficiency for medium- and heavy-duty engines and trucks. We were pleased to be part of the process providing the agencies with information on the positive impact of total vehicle technology integration on fuel efficiency and GHG emissions.”

Ustian said Navistar already has plans in place to continue to support its competitive position by delivering integrated truck and engine technology solutions that achieve maximum fuel economy. “We feel this customer-focused approach aligns Navistar with the intent of the new proposed GHG rule,” he said. “With this rule, EPA and NHTSA have now set an example for what could be a worldwide GHG and fuel efficiency regulation for heavy duty trucks and engines.”

Volvo Trucks said that while it already has done a tremendous amount of work toward improving the fuel efficiency of its tractors and reducing emissions, the company also recognizes that it is “part of the problem” and is committed to being part of the solution.

“The SCR (selective catalytic reduction) trucks we have in the market today are the cleanest in the world in terms of regulated emissions,” said Denny Slagle, president and CEO. “Our focus moving forward is to continue improving fuel efficiency and reducing the carbon footprint of both our products and operations, standing side by side with our customers in managing through the implementation of this new rule.”

Cummins affirmed its support for the regulation and announced plans to certify its engines early to meet the standards. The company said it has worked proactively on the regulation with a wide range of stakeholders over the past several years and already is developing the clean and efficient technology that will be needed to comply.

“Environmental regulations can often be difficult for industry, adding cost and complexity,” said Rich Freeland, vice president and president – Engine Business. “Early on, Cummins set out with the goal of helping the government establish a clear, consistent, challenging and enforceable regulation that recognizes the needs of business and provides incentives to companies that create innovative technologies as well as jobs in this country. This regulation will add real value for our customers, as better fuel economy lowers their operating costs while significantly benefitting the environment.”

Eaton said the new standards provide incentives that will serve as a catalyst for deploying new fuel-efficient technologies such as hybrids and advanced drivetrains. “We are committed to work with our customers to make vehicles, large and small, cleaner and more efficient,” said Alexander Cutler, chairman and CEO.

Bendix said it offers a range of product solutions – including air management and other technologies – to help OEMs and fleets meet the new standards. “Protecting the environment for future generations is everyone’s responsibility,” said Joe McAleese, president and CEO. “Bendix is helping that effort through innovative thinking and a firm commitment to the design and engineering of effective, affordable technologies that will help accomplish the established goal of reduced greenhouse gases and improved fuel economy, plus provide long-term value in terms of environmental responsibility.”

Obama originally was scheduled to make his announcement at Interstate Worldwide Relocation Services, headquartered just outside the Washington, D.C. beltway in Springfield, Md., but the event, attended by representatives of several truck manufacturers, was moved to the White House. The president announced July 29 an agreement with 13 automakers to pursue the next phase in fuel economy of 54.5 mpg for cars and light-duty trucks by 2025. That followed a 2009 deal committing cars and trucks to averaging 35.5 mpg by model year 2016.

“While we were working to improve the efficiency of cars and light-duty trucks, something interesting happened,” Obama said. “We started getting letters asking that we do the same for medium- and heavy-duty trucks. They were from the people who build, buy and drive these trucks. And today, I’m proud to have the support of these companies.”

The American Trucking Associations praised the administration for their work. “Today’s announcement by President Obama is welcome news to us in the trucking industry,” said Bill Graves, ATA president and chief executive officer. “Our members have been pushing for the setting of fuel efficiency standards for some time, and today marks the culmination of those efforts. While it is too early to know all the potential effects of this rule, we do know it sets us on the path to a future where we depend less on foreign oil, spend less on fuel and contribute less to climate change.”

In 2007, ATA endorsed a six-point sustainability program that included a proposal to set technologically feasible efficiency standards in addition to a national speed limit of 65 mph for all vehicles and rules requiring trucks to be electronically governed at that speed; efforts to reduce congestion, which leads to increased idling and wasted fuel; incentives for technology that reduces idling while trucks are off the road; continued support of the U.S. Environmental Protection Agency’s SmartWay program; and federal truck size and weight limit reforms.

“This is an important milestone for our industry and our country,” said Douglas Stotlar, president and CEO of Con-way Inc. “We are pleased to be part of a realistic solution that will ultimately help reduce greenhouse gas emissions and conserve natural resources by helping to increase the fuel efficiency of our industry.”

The Diesel Technology Forum said the work done in recent years by truck and engine manufacturers to meet increasingly tighter emissions standards will pay off in light of the new fuel efficiency standards. “Further improvements to the diesel engine will be made and combined with enhancements to other vehicle components to tackle this new chapter of regulations,” said Allen Schaeffer, executive director of the nonprofit. “Diesel also provides a unique technology platform suitable for expanded use of hybrid powertrains and lower-carbon renewable fuels – both strategies for reducing GHG emissions in the future.”

Schaeffer said U.S. fleets now consume about 22 billion gallons of diesel fuel annually. “Because of the sheer magnitude of commercial vehicles operating in the United States, this regulation has the potential to result in significant environmental and energy efficiency gains,” he said.

The Sierra Club also applauded the new standards. “By setting fuel efficiency and carbon pollution standards for medium- and heavy-duty trucks, we will, for the first time, be able to clean up and improve the performance of the delivery trucks, city buses and freight trucks that Americans rely on each day, clearing our air, saving truckers and businesses money at the pump, creating jobs and bringing the nation a step closer to moving beyond oil,” said Michael Brune, executive director of the environmental organization. “Despite representing only 4 percent of all the vehicles on the road, the trucks covered by today’s announcement consume 20 percent of all on-road transportation fuel used each year, but have never been subject to federal fuel efficiency or carbon pollution standards.”

On Thursday, Aug. 11, Obama is scheduled to visit Johnson Controls Inc. in Holland, Mich. During his tour of the advanced battery facility, he will discuss how innovative technologies help automakers achieve fuel economy standards. 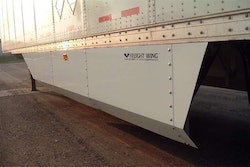