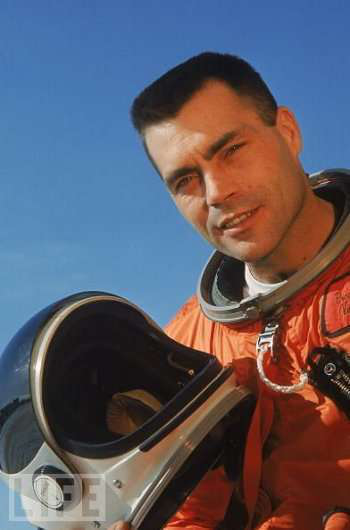 Truck drivers turn up in the strangest of places, don’t they?

For example, have you ever heard of a New Jersey truck driver named Nick Piantanida?

I hadn’t. And I double many of you have, either. But I found myself flipping through the latest issue of Smithsonian Air & Space the other day during a long flight out to Seattle to visit Kenworth. And there was Nick’s story – a truck-driver from New Jersey – who, to this day, holds the unofficial world record for a manned balloon flight and was a pioneer in extreme, high-altitude parachute jumps.

The story by Mark Betancourt, entitled Bullet Man, details the efforts of Felix Baumgartner, a high-altitude parachutist who is currently attempting to break the world record for the highest parachute jump with the help of Red Bull Energy Drinks – which is providing much-needed funding in return for NASCAR style endorsements on Felix’s pressure suit.

As it happens, this is pretty rarified air here – pun intended. There are only a handful of humans on the planet – mostly Americans and Russians – who have attempted extreme high altitude jumps. Most of the early attempts were made for scientific research: In the early ‘60s, scientists were trying to figure out if man could live and work in a vacuum as well as the practical side of establishing procedures for escaping from a crippled spacecraft and returning to earth safely.

The challenges are daunting on the very edge of space where these jumps take place. Airplanes can’t fly that high. And spaceships can’t fly that low. So high-altitude balloons are used to get the jumpers up into the sky for an attempt. A spacesuit is required to protect the jumper from the extreme cold and the thin atmosphere. If the suit fails, your bodily fluids will begin to boil inside you in a process called ebullism. And although you start your jump out by floating in space, you rapidly pick up speed as the air gets thicker: In fact Baumgartner expects to be the first human being to break the sound barrier without the aid of a vehicle during his freefall. It is assumed that the resulting sonic boom will not be strong enough to harm him or his pressure suit. A bigger worry is that the jumper will enter a flat spin: basically twirling around like a record on a phonograph. A small drogue chute is supposed to prevent that from happening. If a spin does start, it is unrecoverable: The excessive G forces will knock the jumper out immediately as his body spins downward at 240 rpm.

Retired U.S. Air Force Colonel Joe Kittinger holds the current high-altitude jump record, which he set in 1960 when he parachuted from 102,800 feet. The jump was big news back then, covered by Life and National Geographic magazines.

It’s Kittenger’s record, which still stands 52 years later, that Baumgartner will be attempting to break. And the only other person who ever come close to beating it in that time was a New Jersey truck driver named Nick Piantanida.

Piantanida was a self-styled adventurer who had dabbled in mountain climbing, sold exotic animals and held various odd jobs to fund whatever project was on his mind at the time. By all accounts, he had a long, deep-seated anti-authoritarian streak and was a hard-charging, do-it-yourself kind of guy. He didn’t have a lot of patience for teamwork.

And that’s what makes his story so interesting. Kittenger had the full resources of the U.S. Air Force and NASA at his back. Baumgartner has the very deep pockets of Red Bull – as well as the expertise of Kittinger, who is an adviser on his team. Piantanida, on the other hand, did everything on his own with a very limited budget.

Not long after Kittinger’s record jump, Piantanida – always looking for a new thrill – gave skydiving a try and decided after his very first jump he would beat the Air Force record. He built his own balloon and gondola. Somehow, he managed to acquire a military-spec pressure suit and made three tries for the record. He trained hard for the jump, driving trucks at night to feed his family and fund his skydiving attempt while working on his equipment and practicing jumps during the day.

He almost got the record. On his second attempt, Piantanida reached 123,500 feet in his balloon – the highest balloon flight by any human being, ever. But, as he was preparing to jump, he discovered the line coupler connecting his pressure suit to the gondola’s oxygen supply had frozen shut. Piantanida told reporters later that a $1.00 wrench would have quickly solved the problem. But as it was, he was forced to jettison the balloon and return to earth under the gondola’s emergency parachute. The free-fall record still eluded him.

On his third try, in May, 1966, Piantanida’s anti-authoritarian streak finally got the better of him. His balloon launch went off well and he was on his way into the stratosphere when something went terribly wrong. No one knows for sure what happened. But Piantanida had a bad habit of opening his helmet visor to look around when he was in flight. He’d been warned repeatedly not to do this. But the evidence suggests that at around the 57,000 foot mark he opened his visor and couldn’t get it to reseal properly. His small support crew managed to get him back on the ground. But not before he suffered massive tissue and brain damage and died four months later.

Later this summer, Baumgartner will make his record parachute attempt. Hopefully all will go well. But it will be world news no matter what happens. And when that day comes, we should all give a thought to Nick Piantanida – a truck driver from New Jersey who had really big dreams.