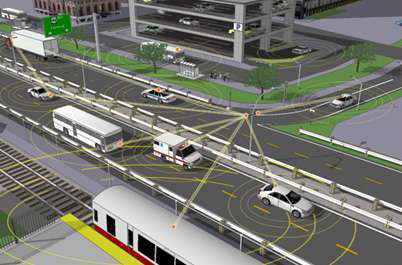 Nearly 3,000 cars, trucks and buses equipped with “connected” Wi-Fi technology to enable vehicles and infrastructure to “talk” to each other in real time to help avoid crashes and improve traffic flow on Tuesday, Aug. 21, began traversing the streets of Ann Arbor, Mich., as part of a yearlong safety pilot project by the U.S. Department of Transportation.

U.S. Transportation Secretary Ray LaHood joined elected officials and industry and community leaders on the University of Michigan campus to launch the second phase of the Safety Pilot, the largest road test to date of connected vehicle crash avoidance technology. “Today is a big moment for automotive safety,” said LaHood. “This cutting-edge technology offers real promise for improving both the safety and efficiency of our roads. That is a winning combination for drivers across America.”

Conducted by University of Michigan’s Transportation Research Institute, the road test, or model deployment, is a first-of-its-kind test of connected vehicle technology in the real world. The test cars, trucks and buses, most of which have been supplied by volunteer participants, are equipped with vehicle-to-vehicle and vehicle-to-infrastructure communication devices that will gather data about system operability and its effectiveness at reducing crashes.

According to the National Highway Traffic Safety Administration, V2V safety technology could help drivers avoid or reduce the severity of four out of five unimpaired vehicle crashes; to accomplish this, the model deployment vehicles will send electronic data messages, receive messages from other equipped vehicles and translate the data into a warning to the driver during specific hazardous traffic scenarios; such hazards include an impending collision at a blind intersection, a vehicle changing lanes in another vehicle’s blind spot or a rear collision with a vehicle stopped ahead, among others.

“Vehicle-to-vehicle communication has the potential to be the ultimate game-changer in roadway safety – but we need to understand how to apply the technology in an effective way in the real world,” said NHTSA Administrator David Strickland. “NHTSA will use the valuable data from the ‘model deployment’ as it decides if and when these connected vehicle safety technologies should be incorporated into the fleet.”

Earlier this year, DOT released data from a series of “driver acceptance clinics” conducted during the first phase of the Safety Pilot; the study revealed that an overwhelming majority of drivers (9 out of 10) who have experienced V2V technology have a highly favorable opinion of its safety benefits and would like to have V2V safety features on their personal vehicle.

The information collected from both phases of the Safety Pilot and other key research projects will be used by NHTSA to determine by 2013 whether to proceed with additional activities involving connected vehicle technology, including possible rulemaking.