No Idle? No Problem

While APUs may be optional for many fleets, APU makers say driver comfort isn’t

Smart fleets know that idling simply is untenable in an age of $4-a-gallon diesel fuel, and more states are cracking down on the practice as noise and environmental concerns grow. The problem, though, is that idling – hated as it may be by many – served an important purpose for many years: Keeping long-haul drivers comfortable in their cabs and sleepers during rest periods. 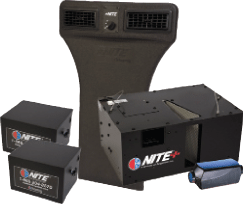 Bergstrom’s Nite System APUs are factory-installed at both Navistar and Freightliner.

The path forward in the no-idle age is still being written. Shorepower is one promising option, but with limited numbers of slots available at truckstops, many fleets are turning to auxiliary power units to provide their drivers with comfort options. These add-on mini-HVAC systems use either battery power or a small diesel motor to power the APU without idling the tractor while providing the off-duty driver with full climate control and electricity.

Fuel savings aside, a number of no-idle regulations at the state and local level may make it unlawful to idle the truck. “Add the environmental impact of idling vs. a battery-operated system, and you have a truly compelling argument to use an APU,” says Bill Gordon, director of global marketing and national director of aftermarket for Bergstrom, which offers the Nite system.

At $8,000 to $10,000 per unit, APUs aren’t cheap. But the good news, APU manufacturers say, is that the return on investment begins immediately, and payback for the system happens relatively quickly.

Idle Free’s APU systems can be installed at the option center for both new Mack and Volvo trucks.

For a $9,500 PowerCube APU, the U.S. Environmental Protection Agency calculates a fuel savings of $8,600 per year based on average use. Going out further, in a three-year period, the ROI is 171 percent. “This return on investment is a big motivator to fleets looking at long-term costs,” says Jill Tolstedt, PowerCube marketing director.

Lynch says Idle Smart reminds fleets that one aspect that is often overlooked in the ROI calculations is the total cost of ownership of idle reduction solutions – acquisition cost plus ongoing operating costs. Installation on truck models built in 2005 or later can be accomplished in less than 90 minutes, and depending on hourly rates from the Idle Smart dealer-maintenance facility network, installation should cost less than $250 per truck, he says.

“Idle Smart will pay for itself with fuel savings alone in about 12 to 18 months,” Lynch adds. “Additionally, there are no ongoing maintenance associated with the units. So acquisition cost is the appropriate input for an ROI calculation but other solutions may have a different investment profile, upfront cost plus ongoing costs, for example.”

The units take up additional space on a vehicle, but Gordon says that in most cases, it’s not a major issue. On factory-installed units, the units are placed in the space geometry the OEM has designated for the units, including areas under the bunks or in cabinets, and they are not so large as to affect storage space significantly. The four deep-cycle Absorbed Glass Mat batteries mount on the frame rail or between the frame rails in a variety of available boxes.

“The heater is typically installed in the tool compartment or frame rails,” says John Dennehy, vice president of marketing and communication for Espar Products. It draws a small amount of power from the battery bank – about 1 amp per hour – and fuel from the existing diesel fuel tank. “The heater then works very much like a home furnace,” Dennehy says. “There is a thermostat housed in the bunk that the driver controls to his desires.”

In the real world

Costs aside, idling remains a highly effective way of keeping drivers comfortable overnight, so it’s only natural that some drivers are hesitant to adopt APUs out of fear that they’ll have to forfeit comfort for fuel savings.

Robert Hopson, chief executive officer of Idle Free, understands those concerns. “We all want to offer systems that work in any kind of conditions the environment has to offer,” he says. “But the reality is that if you get into extreme summer or weather conditions, any system – even the truck’s diesel engine and proprietary HVAC system – will have constraints.”

Hopson says an all-electric APU system has a cooling capacity differential of between 20 and 22 degrees. “If it’s 85 or 90 degrees outside, the system will comfortably cool the cab and sleeper down to about 70 degrees and hold the temperature there,” he says.

Hopson says that about 95 percent of the time, an APU system will suffice, but if a driver winds up in Arizona in the middle of summer, he should try not to take downtime in the middle of the day when temperatures and solar loads will combine to overwhelm the APU’s cooling capacity.

While higher-quality batteries require a larger upfront investment, they will pay for themselves in the long run with fewer premature failures that require replacement, says Patrick Russell, AWP sales manager for Trojan Battery. “Using lower cycle-life batteries may seem a more cost-effective strategy, but a trucking company will lose thousands of dollars each day a truck is off the road and in the shop to replace failed batteries that operate its APU and hotel power loads,” Russell says.