Natural gas 101: The two types of LNG, preparing your shop for LNG trucks

This is the final part of the three-part “Natural gas 101” series. Part 1 covers how the fuel option has become viable for the trucking industry. Part 2 examines the differences between LNG and CNG and what’s right for your fleet.

Further complicating the natural gas picture is that there are two types of LNG fuel, and fleet managers must understand their differences. All LNG is a “cold” fuel; the warmer it gets, the more it expands. LNG becomes saturated when any vapor present is the same temperature as the fuel’s liquid form; “warm” LNG is saturated, while “cold” LNG is unsaturated. The industry uses a color-coding system to differentiate the two fuel types, with blue representing cold LNG and green representing warm.

Gage Garner, Westport market development manager, says his company hopes to standardize the two LNG types. A new LNG fuel system – which will debut on the Cummins-Westport ISX12G engine later this year – is the centerpiece of that effort. (For more on the new fuel system, see CCJ March 2013.)

For now, fleets should understand the operational and infrastructure differences between warm and cold LNG. All LNG is manufactured and transported in a cold unsaturated state. Once the LNG arrives at a fueling station, it has to be warmed in the storage tanks to be used in most spark-ignited natural gas engines. This takes time, and the equipment required to warm the fuel in its stored state is expensive, Garner says.

On the other hand, simple physics dictate that cold LNG, which is denser, is a better match for regional and long-haul trucking applications. More cold LNG can be put into a fuel tank than warm LNG; this also reduces the chance of venting fuel while increasing both the tank’s hold time and the vehicle’s potential range by up to 20 percent.

Warm LNG fuel currently is required for spark-ignited engines, while cold LNG is needed for compression ignition engines. Previous-generation warm LNG fuel systems relied on the fuel’s natural expansion pressure to force fuel into the combustion chamber; this didn’t work with cold LNG because its pressure wasn’t high enough to deliver a consistent fuel flow to the engine.

Westport’s new fuel system uses an electronic control module to monitor fuel pressure in the tank. If the fuel is warm, the system allows the natural pressure to work normally and does nothing. If the ECM senses cold fuel, it automatically engages a frame-mounted hydraulic fuel pump to supply fuel to the engine – a process Garner believes will both simplify and revolutionize the use of LNG in trucking applications.

“We’ll be able to cut infrastructure costs while increasing fuel capacities and vehicle range,” he says. “As a result, range from existing tanks goes up, fuel hold times in tanks increase, fuel decisions for fleets will be simplified, and fuel stations will be less expensive to install.”

Given that LNG warms naturally over time, venting must be considered in fleet operations. “Venting can be an issue if trucks are parked for an extended period,” Carrick says.  If a vehicle is parked with a full tank, it will take about four to five days for the fuel to warm enough to begin to vent, then another five days for it to dissipate. “If the vehicle is parked with a half-tank of fuel, the time for this chain of events to occur will be reduced proportionately,” he says. “If a vehicle is operated and fueled daily, it will not vent under normal circumstances.”

A final LNG consideration involves changes to a fleet’s shop and fueling procedures. “Regardless of whether a fleet uses CNG or LNG, nearly all garages are modified by companies to ensure a safe environment for their employees,” Harger says.

Unlike CNG, LNG fueling procedures require both special training and protective gear for technicians. Also, because LNG is odorless and does not include mercaptin – the “skunk” smell added to pipeline natural gas – maintenance garages will need methane detection devices to work on LNG trucks indoors.

In addition, explosion-proof lighting and ventilation systems are needed in the event of a natural gas leak. Natural gas is lighter than air, so if there is a gas leak, the gas will rise and accumulate beneath the ceiling.  “Open flame space heaters and electrical systems that could spark will also need to be removed,” Harger says.

“Depending on the size of the fleet and garage, a cost-effective approach may be modifying a single bay if properly sectioned off,” Harger says. Based on Clean Energy’s experience, the total cost per bay ranges from  $50,000 to $75,000, he says.

No national standards currently exist for maintenance or repair shops working with natural gas trucks. Carrick says a fleet beginning the process of upgrading its facilities should contact a local fire marshal or other authority with jurisdiction. He also recommends studying the Clean Vehicle Education Foundation guidelines for shops and purchasing the NFPA 30 A regulations and familiarizing shop personnel with those guidelines, specifically section 7.4 that relates to building construction requirements for repair garages.

“If this process is followed, the differences in odorized CNG and nonodorized LNG fuels are clear, and the proper strategy for the fleet may be developed and implemented,” Carrick says.

Given the current high acquisition costs of natural gas technology, fleets that run the vehicles in high-mileage applications will see a faster return on their investment and quicker bottom-line savings. Westport’s Garner and Vedder’s Zweep say an annual minimum of 80,000 miles a year is needed to achieve a reasonable ROI and savings. Assuming the price per gallon of natural gas now is about half that of diesel, fleets can realize a ROI on their investment in 24 to 30 months. 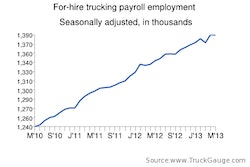 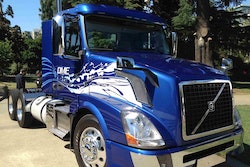 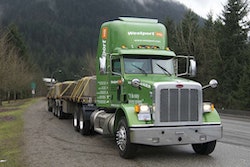