The largest obstacle today for fleets interested in adopting – or at least evaluating – a natural gas truck is the nation’s lack of infrastructure. From an operational viewpoint, most fleets gravitate toward LNG, an unpressurized fuel. CNG tanks require pressurization systems – making them more costly – and take up more space on frame rails then their LNG counterparts. However, the CNG infrastructure currently is much farther along in the United States.

For many fleets, the differences in the two fuels can seem daunting, leading to fears that they will select a “losing” technology – much the same way that early VCR buyers were forced to choose between VHS and Beta tape formats. The good news is that both fuel types are here to stay; the challenge is selecting the correct fuel type for the application.

The fuels themselves are essentially the same, says Robert Carrick, sales manager, natural gas, for Freightliner Trucks. CNG and LNG refers to the state of fuel as it is delivered to the engine – which is “agnostic,” meaning it doesn’t care how the fuel gets there. “Either way, it’s methane,” Carrick says. “The different types are simply the method of storage.”

CNG is methane that is compressed to 3,600 psi for storage at stations and on vehicles. LNG is frozen cryogenically to minus 260 degrees Fahrenheit, allowing it to be stored in a liquid state, saving storage space and weight.

Adding to the confusion is a marketing push on the light-duty side for propane autogas, which is simply propane dispensed from fuel stations for light-duty vehicles and a different fuel than CNG and LNG.

“The CNG process is very simple, similar to connecting your gas grill line,” Carrick says. No protective clothing is required, and a short training video explains the procedure, he says; CNG fleets simply need to connect to a pre-existing gas grid in order to fuel their trucks.

Although there are “fast fill” methods for fueling CNG trucks, most of them take considerably longer than LNG vehicles to refuel. LNG refueling times are now on par with diesel trucks, while many CNG trucks “slow fill” overnight. In some applications – most notably refuse – this isn’t a problem as the vehicles return to their yard every evening and can be fueled simultaneously overnight.

The “time fuel’ approach allows a large number of vehicles to be filled overnight when fast fill is not required. Retail and fleet CNG fuel stations built today with a “fast fill” design will pump from eight to 10 gallons per minute, so there is no performance penalty at those stations.

When fast-filling CNG, the heat gained during fueling is referred to as “heat of compression,” says James Harger, chief marketing officer for natural gas fuel supplier Clean Energy. “It’s not uncommon to see a temperature increase of 100 degrees or more when fueling a truck or bus with 60 to 80 gallons,” Harger says.

Because of compressor and tank pressure limitations, complete fills cannot be accomplished, so when the gas cools off, the pressure in the CNG cylinders often is 20 percent or more below the desired 3,600 psi fill pressure. “Increased CNG storage is necessary to meet the fleets’ desired range, or having to stop and fuel more often will be necessary, impacting the driver’s hour of service and productivity,” Harger says.

The main knocks against CNG – that they lack the range of LNG models and refueling times are slower – aren’t issues for certain applications such as refuse fleets, where CNG-fueled trucks have made tremendous inroads and the fuel has proven to be a perfect fit. “There really is no range penalty,” Carrick says. “The different fuels will operate at almost the same distance.”

The true difference comes from the additional weight of the CNG chassis, which is about 2,000 pounds heavier when filled with fuel compared to 400 pounds for LNG with 135 equivalent diesel gallons of storage. Also, CNG requires three to four times the volume to equate to the same energy density as a gallon of diesel fuel; conversely, LNG requires only twice the volume.

An additional CNG consideration is that while there is an upcharge for any natural gas engine technology, CNG fuel tanks can be more expensive, with fleets spending up to $20,000 to replace tanks damaged in an accident.

“There is no question these systems are expensive,” Carrick says. “High-pressure-compression vessels and insulated storage tanks must be designed to operate safely in a harsh environment on a truck for an extended period of time.” While Freightliner anticipates prices coming down when volumes increase over time, “we may not see that for three to five years,” he says.

At the moment, it appears that LNG may win out as the fuel of choice for regional and even some long-haul fleets, primarily due to the weight and space restrictions found on CNG configurations. Ed Saxman, Volvo Trucks North America natural gas product manager, thinks that as the natural gas movement in trucking grows, some weight and length waivers will be granted to fleets willing to invest in natural gas to help offset these issues.

“Most fleets will buy one or the other type of fuel, but not both,” Saxman says. “The two types are very much different animals. Evaluation and testing are critical for determining which type will work best in your business.” CNG is more suited for trucks used sporadically that may sit idle for weeks or even a month or more, he says. “Generally speaking, CNG is a lot easier to deal with than LNG when it comes to fueling.” 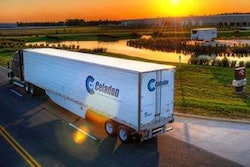