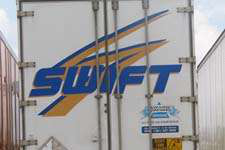 A former applicant for a driver position at Swift Transportation has sued the company for allegedly violating terms of the Fair Credit Reporting Act by not disclosing to him and other applicants that it would be pulling a background check and not allowing applicants to contest those reports.

James Ellis III filed the class-action lawsuit, which says that more than 10,000 applicants were affected by the alleged FCRA violations.

Ellis says in the lawsuit he was denied a job with Swift after the company pulled a report from HireRight Solutions without his consent.

FCRA law says Swift should have notified Ellis within three business days of disqualifying him fro the position that the action had been taken because of information found in the report. They also should have, according to the lawsuit, disclosed HireRight’s contact information, who is required by FCRA law to allow Ellis to see the report pulled by Swift free for 60 days.

The lawsuit alleged that since 2006 the carrier has purchased consumer reports and criminal background checks and has not disclosed the information or obtained proper authorization from applicants prior.

The lawsuit says that per FCRA, consumers can recover punitive damages, statutory damages, attorney’s fees and costs for violating provisions.