The budget porridge on one end of the Capitol was too hot, and the porridge on the other end was too cold. So this Goldilocks Congress, rather than working to find a Transportation Department appropriation that was just right, has busted up the furniture and skipped away back home for the summer break.

To which I’m tempted to say, “good riddance.”

Except here’s what’s coming: When our solons return in September they’ll have very little time to fund the operations of the U.S. Government before the next fiscal year begins Oct. 1. And the just-failed Transportation, Housing and Urban Development appropriation, appropriately dubbed THUD, was to have served as a model for passing some bigger, more controversial spending bills—or so the congressional leadership had hoped.

Like the batboy who starts to bag the gear in the top of ninth only to see the home team blow a big lead, I’ll take the blame for jinxing this one: I had foolishly planned to write about the comparative merits of the House and Senate transportation bills, and what it all could mean for trucking (such as rolling back the hours of service changes).

Unlike Congress, however, most of us don’t have the luxury of not doing our jobs (and boasting about it). So, both to make myself feel better and to fill this space, I’m passing along some good news I’ve come across this week: stories about how trucking has made a big difference, and the big difference the trucking industry can still make.

Who knew cargo containers were interesting? Certainly not I, not until my close personal friend Bill Gates passed along his summer reading list. The least interesting-sounding title among his recommendations is The Box: How the Shipping Container Made the World Smaller and the World Economy Bigger, by Marc Levinson. 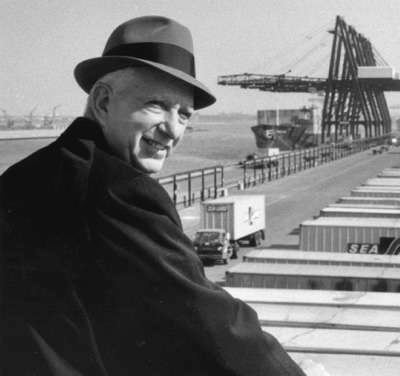 But don’t let that title turn you off. Gates says he was looking for a book about a “key advance that underwrites globalization.” Even though I’m only four chapters deep, the stunning impact of the modest container is already clear.

And in case you didn’t already know, the modern container system was pioneered by a man who had already made a fortune by growing his trucking company from a single pick-up to the first carrier to be listed on the New York Stock Exchange, Malcom McLean.

Speaking of innovation, suppose you came up with a device to make people much more safe as they traveled in cars and trucks. You’d be rich, right? Way rich. Except, in 1962, “Volvo Gave Away the Most Important Design They Ever Patented,” the 3-point seat belt, according to the story on priceonomics.com.

Of course, trucking companies, their employees and drivers routinely make the news for their spirit of giving. Not to downplay other efforts, but Wreaths Across America immediately comes to mind.

For those of you donating basic transportation services, money, canned goods, or labor, have you ever approached a favorite worthy cause and offered your know-how?

Of course, few local charities are that large, and supply-chain solutions might not be high on the list of needed improvements. But what can it hurt to ask?

Indeed, if you’ve had success in lending your transportation expertise this way, please let me know the details. With this Congress, I’m going to have to store up plenty of non-partisan good news to share.