If my lovely wife knew, at the end of long road trip, I had parked an hour from home because a form in my notebook said I couldn’t drive anymore, I wouldn’t need to bother stopping the next day.

That’s the most obvious conclusion gleaned from a weekend jaunt through the Southeast, an out-and-back run to a family reunion. I drove a peppy sedan, making the 825 miles of each Little Rock-Chesterfield, S.C.-Little Rock leg doable in about 12 hours. Google Maps determined that the road miles were essentially equal, whether I opted to take I-40 across Tennessee or I-20 across the Deep South. So I made a loop of it, determined to see what I could see.

As a trucking journalist, I always try to look at the highway through a professional driver’s eyes, and I figured back-to-back full days behind the wheel might provide more insight than a two-hour hop, skip and jump down the interstate, which is about what we, as journalists, put in behind the wheel of the big-rigs we get to road test.

Granted, I wasn’t dragging 80,000 pounds up and down any hills, and I could pull off at almost any exit, park instantly at a gas station or restaurant and be back on the road as quickly as I wanted.

And I knew, at the end of the second day, I wouldn’t have to string together another 5 or 10 such trips before I could get home, spend the weekend on neglected honey-dos, then get up and do it again.

Still, I made some notes. If you’re a carrier exec, a driver manager, or even someone working in the maintenance shed, I’d encourage you to spend a couple of days in the cab with a driver, making observations of your own. If you’re a professional driver, none of this will be new to you, but feel free to pass along your own road notes.

So, for kicks and grins, here’s my list. (This is from the first weekend in August. Truck traffic happened to be very light. Your mileage may vary.)

Best road sign: Someone in Anson Co., N.C., tired of potholes, is asking the government to “FIX!” the broken pavement. Take note, Congress. There are a lot of votes to be had by funding highways.

Most impressive vehicle: A Pete 379 motorhome. To borrow from Bill Murray in “Stripes,” that was “one heavily armed recreational vehicle, man!”

Least impressive vehicles: The various tour buses (I counted four) sitting on the side of the road. As a bus driver-turned-trucker once told me: “At least freight don’t complain.”

Most impressive weigh station: Georgia, I-20 at the South Carolina line. (Closed.)

Smoothest segment of interstate: I-20 WB in Georgia, the last few miles before the ‘Bama line. New pavement, and so silky it tickles.

Roughest segment of interstate: I-20 WB in Alabama, after crossing from Georgia. Serious construction has closed the left lane and shifted the right lane onto the shoulder, which has the perpendicular “wake up!” sets of grooves cut into it. If enhanced interrogation techniques had included putting terrorists in the cab of a truck driving here, the CIA would have found bin Laden a lot sooner.

Prettiest segment of interstate: I-40 across the Smokey Mountains, along the Pigeon River crossing from Tennessee into North Carolina.

Least truck-friendly segment of interstate: Same as above. There are longer and steeper pulls out West, but I’d like to know if there’s another section of a major interstate this narrow and winding anywhere else in the country.

Fastest segment of interstate: On this trip, I-20 coming out of Columbia, S.C., to Augusta, Ga. Dozens of cars were doing 90 mph or better. I slipped in with a few, but couldn’t keep up and be comfortable about it.

If the talking GPS starts to laugh: You must be headed into Birmingham, Ala. I-20 is closed, period. But even the messy detour is an improvement.

Usual problems that weren’t: I-40, Little Rock-Memphis. (Rough, with plenty of truck traffic and elephant races, but at least the segment was open the entire way, both directions.) Also, I-20 through Atlanta. (Sunday afternoon meant eight lanes of 80 mph madness, but that beats the typical weekday, multi-mile parking lot.)

Peaceful, easy feeling segment: I-22 (US 78) from Cordova, Ala., to the Mississippi line. Wide and smooth with little traffic, I caught this stretch as the mist started to rise from the densely forested valleys and the low sun burned blood orange, framed by some dark, distant thunderheads—and my playlist shuffled to Leonard Cohen’s “Hallelujah.” It provided a moment of grace that put me in a good place for the last four hours. I’m thinking that if a professional driver can come up with such a moment every day, life on the road isn’t all bad. 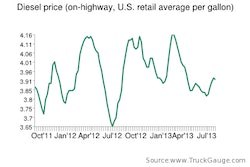