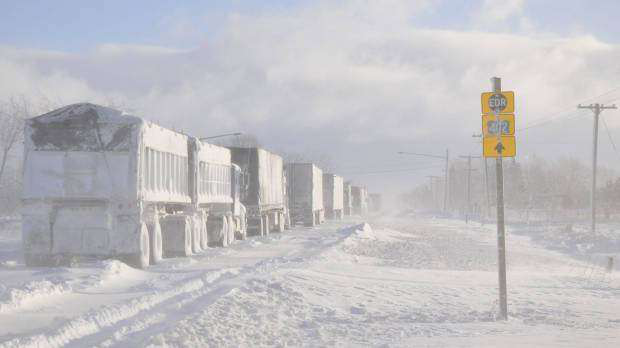 Winter is hard on trucks and drivers alike. That thought occurred to me today as I was reading over a study released by Webasto showing that pre-heating diesel engines in cold climates has dramatic performance benefits in terms of reduced emissions and diesel particulate performance.
According to the study, Webasto contracted with an independent emissions testing Lab to see what the the effects of a Webasto coolant heater have on the emissions performance of a diesel engine.

To simulate different temperature conditions during the seasonal changes and the effect caused by the Webasto heater, boundary conditions to the test engine were set at 40 degrees Fahrenheit and 75 degrees Fahrenheit during separate test runs. Specifically, the emissions testing using an AC transient engine dynamometer, and was performed to determine the effect of engine start-up temperature on PM, HC and CO emissions on a 2005 DT466 engine using an FTP Transient cycle with a Webasto Thermo Top C 5 Kw coolant heater (Part Number 923369). Emissions data shows that the start-up temperature has a significant effect on the engine emissions and overall performance of DPFs.

The results, according to Webasto, were compelling and showed that:

* Engine start-up temperature has a significant impact on the emissions levels emitted by the engine.*

* PM emissions were reduced by 66 percent by pre-heating the engine during the cold weather conditions. Pre-heating also provided a 27 percent reduction in PM emissions during normal ambient conditions. This will help in longevity of the DPF life and can avoid more frequent regenerations and cleaning intervals.*

* NOx emissions were reduced by around 40 percent by pre-heating the engine to 155 degrees Fahrenheit.*

* Pre-heating the engine does not have a significant effect on the Hydrocarbon emissions.*

The conclusions, Webasto official say, show that “Pre-heating engines improves DPF performance and longevity along with extending the duration between cleaning cycles on engines that do not run a heavy duty cycle. Even engines in warm climates of 70 – 80 degrees Fahrenheit (for example) are not completely warm until they reach 130 degrees Fahrenheit and higher for optimal performance. Webasto coolant heaters provide optimal temperature at start-up.”

My thought is that this stands to reason and doesn’t even take into account increase internal friction caused by inadequate lubrication due to cold engine oil. If you’re running north, there’s definite food for thought here.