“The stage is set for an uptick, question is how high will it go?,” said Andrej Divis, director, global truck research, IHS Automotive There are some mixed dynamics heading into 2014. Divis added that the net order intake for U.S. Class 4-8 trucks is very positive heading into this year, and IHS Automotive is forecasting a 10 percent growth this year and 9 percent growth in 2015.

That optimism spills into the overall economy, as Divis said IHS Automotive’s outlook is for a 2.5 to 3 percent broad-based growth in Gross Domestic Product this year. Factors leading to strong GDP include an expected growth in exports to exceed growth in imports, lower government spending relative to 2013 and a solid increase in household consumption. “These all interlock with growth in freight and truck demand,” said Divis. “If we have a sub-par year, we should do no worse than moving sideways.”

Bill Strauss, senior economist for the Federal Reserve Bank of Chicago said the second largest factor (behind consumption) in last year’s 2.5 percent GDP growth was change in inventories. “Unlike consumption, it represents a tiny fraction of GDP, but it contributed a major share of GDP growth,” he said.  “A good share in inventory gain was undesired. This will be a headwind to growth in early 2014.”

Strauss said the industry is starting to see upward movement in terms of capacity, noting that revenue per mile in the truckload segment is above pre-recession levels. “Loads are now exceeding tractor count index, suggesting things are getting tighter,” says Strauss.

Strauss outlined several major challenges fleets will face in 2014, including the cost of a new diesel-powered sleeper tractor — $126,000 in 2013 – and driver turnover. Truckload driver turnover rates are close to 100 percent, and larger carriers are finding it tougher to keep their drivers than smaller carriers, according to research by the American Trucking Associations.

Also citing ATA research, Strauss said that the majority of fleets, regardless of size, anticipate raising driver pay, including 88.5 percent of medium-sized truckload fleets and 72.2 percent of large truckload fleets, while only 58.8 percent of private carriers indicated they would increase pay. 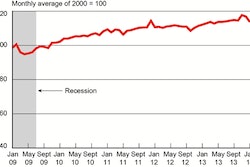