On Tuesday, March 25, a fleet executive panel at the Truckload Carriers Association Annual Convention responded to the possibility of electronic logging devices (ELDs) being a Trojan horse to reform driver pay.

“It’s not accurate to be used for that purpose,” he said, explaining that fleets do not control drivers or approve and disapprove of every hour they work. Mileage-based pay motivates drivers to maximize their driving hours in a compliant fashion. By contrast, hourly pay does not give drivers more available driving time and makes them less motivated to minimize their unproductive “on-duty, non-driving” hours.

“Those hours tend to be inflated and that becomes the basis for minimum wage calculations,” he said. “That’s why we have a production-based system.”

California’s minimum wage law adds another layer of complexity. Companies that use a piece-rate compensation formula have to pay their workers separately for rest periods. Attorneys also argue that mileage-based pay does not comply with the law to cover driver work activities like fueling and detention at shipping and receiving facilities.

“The industry argues that (paying drivers by the mile) is preemptive and full of interpretation,” England said. “When you think about the production impact of paying hourly rather than by the mile that’s a scary thought.”

Driver unions and the Owner-Operator Independent Drivers Association are also leading a charge to reform driver pay as reported by CCJ.

“This industry is notorious for being able to move boundaries. Let’s hope that never happens. There are ways to do (hourly pay), but just not ways that you can do economically,” said panelist Clifton Parker, president and general manager of G&P Trucking Company, a 700-truck carrier based in Gaston, S.C.

“Our goal is to get miles on these guys,” said Jerry Moyes, chief executive officer and founder of Phoenix-based Swift Transportation Co., the largest truckload carrier in the nation with 16,000 drivers. “Mileage is a good incentive for the drivers as well as everyone in the company and I think we ought to continue to put our focus on that.”

The panel, moderated by Todd Amen, president and chief executive officer of ATBS, Inc., also discussed the future of the independent contractor model as state agencies and the Internal Revenue Service continue to ratchet up their efforts to re-classify contractors as employees to collect more payroll taxes.

Swift runs about 5,000 owner operators. The biggest challenge today is adopting its model to the rules of various states, Moyes said. England agreed that pressure is coming mostly at the state level to reclassify contractors as employees and mentioned a new law in the state of New York that classifies contractors as employees if they lease their equipment from a related company.

C.R. England has about 1,000 contractors today, he said, and does not plan to grow that segment of its business.

The panel also talked openly about a range of issues such as a focus on driver retention, management strategy, natural gas trucks, lessons learned from the recession and raising fuel taxes.

Todd Amen also asked some personal questions like why Jerry Moyes decided to acquire Swift before the recession using a leveraged buyout. Moyes said that of the $2.7 billion he took on in debt, $500 million was financed at 12.5 percent interest.

“The bad news is that my interest was a million dollars a day. The good news is that it was only five days a week,” Moyes joked. The leveraged buyout put an enormous financial strain on the company, but the lean years toughened Swift and forced changes that were necessary to keep its EBITDA earnings between $400 and $500 million en route to taking the company public in 2011.

Regarding how to fund highway infrastructure, all panel members agreed that raising the fuel tax is the best option and chided politicians for their lack of courage to garner support for the measure.

“I think we have to raise the fuel tax. It’s been probably 40 years since we’ve done it,” Moyes said. “This industry is in a position to pay more fuel taxes in my opinion. Through the fuel surcharge it is going to get passed on and I think that is the only answer.”

“The answer is fuel taxes,” England agreed. “It’s just a matter of politicians getting the will to pass the fuel tax increase. They seem to only be concerned about the next election so that hasn’t happened yet.” 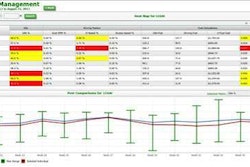