Trucking trade groups held their formal public comments on the proposed federal electronic logging device mandate until the waning hours of the 90-day comment period, and each of the major ones fell as expected in terms of support or opposition: The Owner-Operator Independent Drivers Association against, with the American Trucking Associations and Trucking Alliance for.

ATA said in its 18-page comment it supports the mandate, but it wants to see a few changes made before the final rule is published, chief among them being boosting early and voluntary adoption by carriers and not including any language int he bill that could potentially “penalize” early adopters.

One of the changes ATA seeks is to extend the grandfather period of fleets that run either older forms of electronic logging devices (like EOBRs) or adopt ELDs well before the required deadline (two years after the final rule is published).

ATA says that two-year period is too short, though, and the competitive disadvantage early adopters face in the marketplace works against a fleets’ intended goal of safety and compliance with hours-of-service regulations when switching.

“These inequities ultimately penalize early adopters and will discourage other fleets from installing ELDs before the final deadline to do so, especially under the new, more restrictive, hours of service rules. Since FMCSA is proposing to mandate ELDs, presumably the agency would favor early, voluntary adoption,” according to ATA’s written comment.

In addition to extending the grandfather period, ATA says to promote early adoption and not to penalize those that do, the agency should reduce the violation weight in CSA’s Safety Measurement System for minor hourly and false log violations committed by ELD users and provide ELD users temporary relief of the 30-minute break requirement of the 2013 hours-of-service rule, among other suggestions.

ATA also says the requirement for drivers and carriers to keep up to 10 supporting documents for each day the driver is on duty are “excessive and unnecessary,” ATA said in its comment, noting ELDs “all but eliminate” the need for carriers to keep any documents to back up logs.

The Trucking Alliance — a coalition of carriers and other industry stakeholders — said in its comment the ELD mandate will be the “most significant change since deregulation,” adding it will reduce compliance violations for carriers and help boost CSA rankings.

Drivers too will have freer schedules, as ELDs “remove the tedious burden of filling out paper logbooks,” the Alliance wrote.

OOIDA, however, penned a nearly 50-page comment outlining its concerns and opposition to the rule, saying tehre are no devices capable of performing as FMCSA described in its proposal, nor did the agency take enough steps to prevent harassment and coercion of drivers by carriers or others in the industry.

OOIDA says electronic logging devices, contrary to what FMCSA has proposed in its rule, still rely on drivers to input manually changes of duty status, therefore not increasing hours of service compliance as intended, the group says.

“While it is true that ELDs can measure an individual’s driving time, those devices cannot determine compliance with the HOS rules any better than paper logbooks. Nor can they determine whether a driver has had an opportunity to obtain restorative sleep in order to eliminate fatigue,” OOIDA writes.

OOIDA also says the agency’s attempts in the rule to prevent driver harassment and coercion, which derailed the last EOBR mandate in court, again come up short. (Click here to read CCJ‘s coverage of the rule’s harassment prevention measures.)

Per OOIDA’s comment: “FMCSA’s proposal on harassment is not carefully conceived and provides no effective tools to ensure against harassment. OOIDA is incredulous that FMCSA has put off for another day specific regulations dealing with coercion. The concepts of harassment and coercion are closely intertwined. The pressure put on motor carriers by shippers and receivers to follow unrealistic delivery schedules favors addressing the problems of harassment and coercion comprehensively in a single proceeding.”

There’s no set timeline for when the agency will produce a final ELD mandate rule, but it could be several months, if not longer. Congress could attempt to include language in a transportation bill to set a deadline, however, as the Senate recently did in its DOT-funding bill, which would set a Jan. 30, 2015 deadline for the final rule.

The effective date of the mandate would be two years after the publication of the final rule, so likely late 2016 or early 2017. 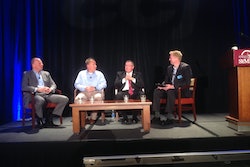