The California Division of Labor Standards Enforcement has awarded $9,000 in unemployment benefits to a trucker it says Total Transportation Services Inc. misclassified as an independent contractor.

Los Angeles Mayor Eric Garcetti negotiated a cooling off period after the work stoppage’s fifth day. The companies agreed the truckers could return to work without retaliation or signing away rights in new truck leases.

JPTD said shortly before the strike, TTSI announced it would terminate leasing arrangements with drivers and they would have to provide their own trucks. It would fire truckers who did not sign new independent contractor agreements and withdraw wage theft claims with the DLSE.

The terminations were to be effective Aug. 1, but delayed to Sept. 1. On Aug. 29, drivers attempted to meet with the company to sign new leases, but were told to come back Sept. 2.

When they returned, TTSI said they would not be required to withdraw their claims. Some signed new lease agreements and were dispatched. While other drivers were waiting to sign, TTSI demanded they withdraw claims, then terminated more than 35 truckers who refused. 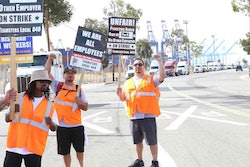