Saying it has ignored Congress, the Government Accountability Office and members of the trucking industry, Sen. Deb Fischer (R-Nebraska) Wednesday leveled some harsh criticism at the Federal Motor Carrier Safety Administration and called for reforming the agency.

Her remarks came during and after a hearing on Capitol Hill of the Senate Commerce Subcommittee on Surface Transportation and Merchant Marine Infrastructure, Safety and Security, which she chairs.

The senior senator from Nebraska plans to introduce reform legislation to make FMCSA more inclusive of Congress and industry stakeholders and increase its transparency. Fischer also said she will author legislation to require the agency to conduct more robust and comprehensive cost benefit analyses of proposed regulations.

“Some of the FMCSA’s actions over the past years challenge our shared goal of enhancing safety,” Fischer said in her opening remarks. She also referenced a 2014 GAO report that concluded FMCSA’s CSA rankings were inaccurate, costing trucking companies business and leading to other residual effects, such as higher insurance rates for carriers.

She also questioned the agency’s handling of the 2013 changes to federal hours-of-service rules for truck operators.

“The FMCSA issued the final 34-hour restart rule in 2013 with complete disregard for Congressionally mandated requirements for the study of the rule’s impact,” she said. “When the study was eventually issued several months late, the sample size was not representative of this diverse industry. In addition, serious concerns were raised about the rule’s perverse impact on safety, because in effect it pushed drivers onto the roads during workers’, students’ and families’ morning commutes.

The ranking member of the subcommittee is Sen. Cory Booker (D-NJ), who mentioned how the high profile accident involving comedian Tracy Morgan in June of 2014 took place in his state and brought truck safety into the national headlines. He added that nearly 4,000 people die in truck crashes each year and more than 100,000 more are injured.

“That is simply unacceptable to every American,” said Booker. “From 2009 to 2012 truck crash injuries increased by 40 percent and fatalities increased 16 percent. This is absolutely unacceptable. This cannot simply be the cost of doing business.”

He said there are common sense steps that can be taken to make highways safer.

“There is no place on our roads for tired truckers,” added Booker, who said his concerns also include longer and heavier trucks, minimum insurance amounts and driver pay.

During the hearing Fischer asked Scott Darling, acting administrator of the FMCSA, about issues raised concerning the data used in the Safety Measurement System (SMS) and changes the agency planned to make.

“The information provided in the SMS data is good data,” said Darling. “It’s the data we use to prioritize our interventions. It’s the data used by the public to make decisions every day. It’s data that I have also heard from carriers that they use to improve their performance.”

He said FMCSA has a continuous improvement team in place working with all stakeholders.

In response to a question from Fischer about what reforms FMCSA is considering, Darling said the agency is in the process of looking at different changes, but “we are not at a place today to identify changes. We have some changes we will be implementing by the end of the year but we are working through a process.”

When asked by Fischer if he had any specific changes to discuss at the hearing, Darling said he did not. Afterwards, Darling reportedly told Fischer he would get some specific details to her.

ATA issued this statement in response to the hearing:

“Yesterday, the flaws in CSA were again highlighted and again the agency insisted it will do nothing to correct them,” said ATA President and CEO Bill Graves. “FMCSA should not just hear the concerns expressed by Senator Fischer and the GAO, but address them with real action.” 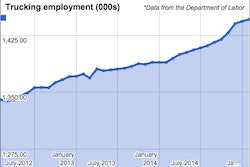