Echoing trucking industry concerns since the program’s inception in 2010, one of the Federal Motor Carrier Safety Administrator’s top officials this week said the agency knows that penalizing carriers for crashes that were not their fault is “not fair” to carriers or the trucking industry as a whole.

But — and this time echoing his own agency — the likelihood of FMCSA incorporating some type of crash accountability or crash weighting in the expansive regulatory program is slim to none, said FMCSA’s Chief Safety Officer Jack Van Steenburg, who participated this week in a point-counterpoint discussion on industry regulations at the CCJ Spring Symposium.

Steenburg told the fleet managers and executives in attendance that even if there were some way to weight crashes for fault in the system, it likely would only be for those that were “really obvious ones.”

“It’s not fair to the industry. I’ll come out and say it,” Van Steenburg told the audience of trucking company managers and executives. “We recognize we have to do something for the industry.”

Admittance is the first step to recovery, so they say.

However, admittance does nothing to solve CSA’s frustrating disregard for crash fault. And Van Steenburg, while admitting CSA has the problem (one among a long list of others), also admitted the agency can’t do much about it.

FMCSA itself said earlier this year in a study on the issue that assigning crash fault relative to CSA rankings would be too cumbersome, lack uniformity from state to state and offer little benefit in the end.

Sounds much like the CSA program itself, doesn’t it?

Click here to read more from Steenburg’s address, which was held alongside TCA’s David Heller.

And click here to read all of CCJ’s coverage from this week’s CCJ Spring Symposium. 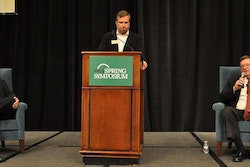