A new Congressional report says the Federal Motor Carrier Safety Administration has limited ability to truly evaluate the 2013-implemented hours-of-service rule because its study did not meet research standards and has data constraints.

The GAO report covers the agency’s 2014-released study on the HOS rule, not the one currently in the works required by a December 2014 DOT-funding act, which also suspended certain portions of the 2013 rule.

The GAO reported that the agency had done an OK job designing the study and analyzing data, but had not used guidance outlining specific standards for conducting and reporting results.

The GAO says FMCSA failed to report several limitations and had not fully linked results to its overall conclusions, the GAO stated. The agency agreed with the recommendations, but maintained it had adhered to standard research principles and practices in its January 2014 HOS study.

Transportation Secretary Anthony Foxx outlined what the DOT took as a positive from the report, namely that it “provides further evidence that the changes FMCSA made to the HOS rules improve highway safety by saving lives and lowering the risk of driver fatigue. This reinforces our belief that these life-saving measures are critical to keeping people safe on the roads.”

The GAO said FMCSA lacked methodology supporting the study’s objectives and cited the 2013 requirement that drivers take two night-time breaks in their restart as an example. It should have compared fatigue after a one-night and a two-night restart, but instead, compared drivers with one-night restart to those with two or more nights of rest. This could have skewed the results, the GAO wrote.

It also had not completely met certain standards regarding reporting limitations and linking the conclusions to the results. Therefore, the agency’s conclusion about the extent to which crash risk is reduced by the HOS rule may have been overstated, the report says.

The GAO had purchased data from the American Transportation Research Institute for its report. That provided 15,000 driver records from 16 for-hire trucking companies, but is not representative of other industry segments, such as owner-operators and private carriers.

“Due to current data limitations, it is not possible to fully evaluate the rule’s impact,” the GAO wrote. “For example, our analysis suggests that the rule may have affected a larger population of drivers than FMCSA anticipated, but without representative data there is no way to be certain this is universally the case.”

It said its own analysis of a limited sample of available data provides some insight into the rule’s effects and the extent it aligns with FMCSA’s assumptions and estimates. Some drivers at the sample of 16 for-hire carriers who worked the longest hours (more than 65 hours weekly) reduced hours after the rule became effective. The GAO’s finding is consistent with the FMCSA’s assumption that drivers working more than 65 hours were more likely to be affected.

However, GAO’s analysis found those who worked less than 65 hours weekly also changed their schedules after the rule, a result not anticipated by agency.

In responding to the report, the DOT said the GAO had recognized achievements associated with the rule: A decrease in the frequency of long work schedules, lower risk of driver fatigue, and reduced fatal truck crashes. “As we state in this report, however, these findings cannot be directly attributed to the rule,” the GAO wrote.

Also, electronically collected representative schedule data will soon be available to agency, but the 2012 highway reauthorization limits use of this information to law enforcement.

Given that collecting and analyzing this data would require dealing with privacy and cost concerns, the GAO recommended that Congress consider requiring the agency report on these concerns could be addressed.

In December, Congress suspended the two-night provision until September 30, 2015 or when the FMCSA completes a new study, which ever comes later. It also suspended the once-per-week limit of the restart’s use. 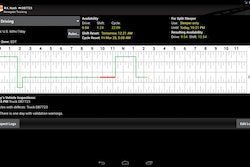