Over the weekend, an op-ed piece titled The Trucks are Killing Us appeared in The New York Times. The piece was written by Howard Abramson, a past executive at the American Trucking Association (ATA) whose primary duty was to act as editor of Transport Topics magazine. Full disclosure: I know Mr. Abramson somewhat, having been on various press junkets with him all over the world.

Ironically, the overriding theme at these OEM press trips has always, and consistently been, safety. In a couple weeks’ time, I’ll travel down to Orlando, Fla., for the Technology and Maintenance Council’s Fall Meeting. Once again, the focus of many of the sessions, and a consistent topic of discussion among the fleet managers attending will be safety.

In fact, as I sit here and write this response to Abramson’s article, I stopped for a moment to try and recall the last time I attended any industry event, be it a press event by a truck manufacturer or a component supplier or an industry organization meeting where safety was not prominently featured and discussed – right up to the Volvo event I attended in Utah just last week. I couldn’t come up with a single one.

The idea that trucking today is an under-regulated, out-of-control industry hell-bent on delivering goods — cost and civilians be damned — is so out of date as to be laughable. It was a fair bit of criticism back when you could buy a black Trans Am to run interference while your buddy ran a load of Coors beer from Texarkana to Atlanta. Not so much today.

Now, Abramson left ATA more than a year ago, so perhaps he hasn’t been following the industry as closely as he once did. But as I’ve consistently noted in my CCJ blogs for quite awhile now, trucking is, in fact, in the middle of the greatest wave of new regulations and mandated safety devices that this industry has ever seen. This very week, in fact, we’re expecting a new mandate on speed limiters. Likewise, new rules to mandate electronic logging devices is expected in the coming weeks. And numerous other proposals are also being looked at, including mandatory lane-departure warning systems, tire-pressure management systems and collision avoidance systems, to name a few.

Earlier this month, the Florida Trucking Association was kind enough to ask me to speak at its annual meeting in West Palm Beach on the future of trucking. During my talk, I told the audience that in my opinion, they could bank on every single piece of safety technology available today being required by law on their vehicles over the next 5 to 10 years.

And what, you may ask, was the audience’s response to that little truth bomb? Howls of protest? Threats to shut the fleet down and go into the landscaping business? Demands that we overthrow the government?

No. The response was a lot of nodding heads from trucking professionals who are already doing all they can to ensure they run the safest possible commercial vehicles. These are people who also understand that more rules and technology are coming. And as these new mandates hit, they’ll roll their sleeves up, dig in, get the technology up and running and make sure those trucks keep hitting the docks on time. I wasn’t telling them anything they didn’t already know.

Another important point I made during my talk in West Palm Beach applies here as well: We are in the beginning stages of a global economy that is wholly reliant upon efficient logistics to function and grow. Freight is moving faster than ever before. And that pace is only going to accelerate and reach ever-more remote corners of the globe. And all of this is going to happen in our lifetimes.

Abramson seems to think that this utterly useless and dysfunctional Congress can just snap its hands and magically require fleets to instantly install a whole host of brand-new safety systems without any thought as to industry impact, cost or sustaining the health of both the U.S. economy and this emerging, connectivity-fueled global trade network.

Do some trucking executives grumble about some of these upcoming mandates? Sure. These technologies aren’t cheap. And we’re already talking about tractor-trailer combinations that cost as much as a really nice, new, five-bedroom home. This brings us to another point Abramson blithely ignores: At some point, all of these accumulated costs will simply have to be passed onto the customer. That’s an economic reality with far-reaching implications for our collective economic well being and yet another strong argument for not dumping a whole host of new technologies and rules on an extremely vital part of our economic engine and overwhelming them to the point where it can’t move finished goods and raw materials.

In his Times piece, Abramson uses the 2014 high-profile Tracy Morgan crash as the centerpiece of his argument that it’s time for Congress to quit “coddling” the trucking industry and crack down on them with even more draconian measures and required safety equipment. He goes out of his way to note that Walmart is one of the most modern, up-to-date and safe fleets in the country. And while he does note that the driver was clearly at fault in the crash, his overall conclusion is that Walmart is one of the safest fleets out there today – and yet this still happened.

But again: The Walmart driver in question had driven 12 hours in his personal car to get to his terminal prior to starting his job. He then was on duty for another 13-and-a-half hours. That’s a grand total of 25 hours without sleep.

That’s criminal stupidity. And that driver is going to pay for it.

But here’s another vital point: There’s not a safety system on the market today that can protect fleets and the driving public from that degree of criminal neglect and irresponsibility. The only systems that could conceivably combat behavior like that are real-time driver health monitoring systems combined with autonomous truck technology. And both those are in active development today and will be ready for fleet adaptation in the near future.

The bottom line here is this: Trucking is getting safer all the time. And that trend is accelerating rapidly. It’s getting harder every day to skirt the rules. Bad actors are leaving this industry because they know that soon, they’re going to have to follow the exact same rules as everyone else. They’ll have no choice in the matter.

Everyone I know and talk to in this industry is passionately and whole-heartedly dedicated to making trucking safer and more efficient every single day they’re on the job. This industry has made huge gains in terms of safety. And even more giant leaps are coming. To suggest otherwise is irresponsible and hypocritical, especially coming from someone who drew a nice paycheck from the trucking industry for 16 years. 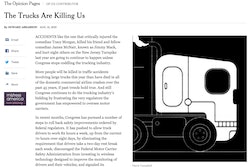 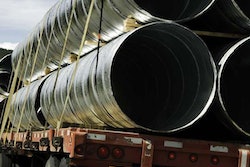