Increasing truck size and weight limits will boost the U.S. trucking industry’s productivity, reduce the number of truck-involved accidents each year and, most importantly, level the playing field between the U.S. and key international competitors like the European Union, Canada and Mexico and other developed countries, said University of Michigan professor John Woodruffe at a panel discussion for fleet executives and managers held Aug. 26.

Woodruffe was one of four panelists in a discussion on the future of global freight infrastructure held at the 2015 CV-Outlook. The freight infrastructure panel spanned topics like smart highways, vehicle-to-vehicle connectivity coming safety technology mandates and where the U.S. stands globally in truck freight efficiency.

Woodruffe was tasked with delivering the sobering news on truck efficiency — that the U.S. has the worst truck freight efficiency of the world’s developed countries. The reason, he said, is because size and weight limits in the U.S. have been frozen for 30 years. “What that means is the design of the truck in terms of weight capacity and in terms of its length has been fixed for about a decade,” he said. “The U.S. is the least productive country in the world when it comes to truck productivity.”

What this means for the U.S., he said, is that the trucking industry, consumers and society at large are losing or lagging in key areas. “The nation’s freight task is limited,” he told attendees. “If you allow trucks to be heavier and longer, they can do the task with less truck trips, which reduces vehicle miles traveled.”

Just a 10 percent reduction in truck mileage, he said, would prevent 330 fatal truck crashes a year, cut about 30 million metric tons of CO2 emissions annually and save about 10.6 billion liters of diesel.

The kicker, he said, would be about $16 billion boon to the U.S. economy.

Smarter trucks, smarter roads and efficiency and financial gains from both were central themes of the panel’s discussion.

Levinson said for the first time since the automobile began its 100-year boom in the early 20th century, miles traveled per capita has stagnated, with demographic changes (retiring baby boomers, for instance) and online commerce being two of the key drivers. Traffic congestion, however, may not be impacted, because total miles traveled in the U.S. is still on the rise due to population increases and other long-term trends.

As the world’s relationship with the automobile changes, Levinson said, so does the potential for alternative fuels and electric-powered vehicles.

“Full battery electric vehicles and plug-in vehicles are coming into the market now,” he said. “If you turn this type of data through an s-curve (a model used to predict uptake of new technologies), you come up with around 2030 for when half of car sales will be electric.”

That uptake will be later for trucks, he said, though he still sees electric trucks on the horizon.

Similarly, Levinson said, around 2030 half of cars sold will be some form of autonomous. “Technology will drive regulators rather than the regulators driving technology,” he said.

And as automated lane-keeping systems become more prevalent in heavy trucks and passenger cars, narrower lanes and narrower vehicles could follow, Levinson said. “We can rethink how we design cars,” he said. “With lane keeping systems, we can have narrower lanes and shared lanes. Two cars driving in tandem in a lane,” he said, could reduce congestion and improve overall efficiency of U.S. transportation. 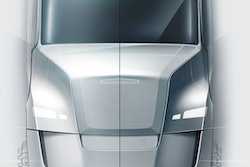 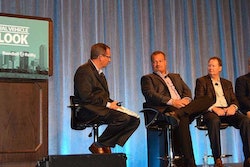