Truckers picketing Pacific 9 Transportation have been joined by drivers from two other Southern California drayage companies as Pac 9 enters its 10th week of strike.

Carrying “We Are All Employees” signs, the recently unionized Shippers Transport Express and Eco Flo Transportation joined the protest at Pac 9’s Carson headquarters. Eighteen months earlier, the National Labor Relations Board made a settlement agreement with Pac 9 truckers.

The NLRB found the drivers had been misclassified as independent contractors instead of employees. The board also concluded the drivers had experienced unlawful retaliation and threats when attempting to unionize. That settlement has since been withdrawn, according to the Teamsters union.

On Sept. 10, the California Division of Labor Standards Enforcement concluded six weeks of hearings for 38 Pac 9 truckers who say they should be classified as employees. They charge that that the company owns them more than $6 million in unlawful deductions, unreimbursed expenses, unpaid meal and rest break premiums.

That figure does not include an additional $2 million in liquidated damages, interest and waiting time penalties, according to the drivers, A board determination in the case is expected in upcoming weeks. 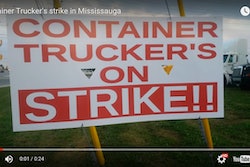