In May, when Freightliner pulled the curtain back on its new Inspiration autonomous truck model, the company promised CDL-holding journalists the opportunity to get a Nevada autonomous truck endorsement in the fall.

This week, I found myself once again at the Las Vegas Motor Speedway – just north of Sin City – where I was able to climb behind Inspiration’s wheel and see just what it’s like to be in control of an autonomous truck as it drives itself down the highway.

Freightliner engineer Jim Martin was my instructor, riding shotgun in the passenger seat. He gave me an overview of the system while the truck was parked. Martin noted that Freightliner took great pains to make sure the Highway Pilot autonomous driving system was both simple and intuitive to operate. And that goal has been accomplished. In practice, Highway Pilot is about as complex to initiate as a common cruise control system on cars and trucks today.

Highway Pilot uses an array of vehicle safety and sensor systems to guide itself down the road. These include specialized cameras that track lane markings, two separate radar systems, GPS vehicle tracking systems and Detroit’s DT12 automated manual transmission. All of the systems on the truck that support and enable Highway Pilot are tried, tested and on the market today, save one: An electric servo motor connected to the steering column that actually takes signals from the Highway Pilot electronic control system and translates those commands into actual steering wheel movements.

But, Freightliner engineers note, almost all of the Highway Pilot systems are in widespread use in fleets today. As startling and sensational as the thought of an autonomous truck may be, the fact is the integration and combination of these existing technologies are what enable autonomous vehicle control.

Behind the wheel, enabling Highway Pilot is only possible when all the systems’ sensors are satisfied that safe operating conditions are present. The cameras, for example, must have clearly defined lane markers to track. The radar systems must have uncluttered acuity looking forward and the GPS system must have a strong signal and reliable information about the area the truck is operating in.

If all those conditions are met, the driver is alerted via a message flashed onto the information screen directly in front of the driver. At that point, initiating the system is simply a matter of hitting the “Resume” button located on the right-hand spoke of the steering wheel.

As soon as Highway Pilot is activated, another message alerts the driver and the system immediately takes control of the truck. Other visual cues include horizontal bars across the futuristic rear-view monitors attached to the A pillars inside the cab. When the line across the screen is white, the system is not active. Once engaged, the bar turns a vibrant shade of blue to reassure the driver the system is up and functioning properly.

The first time you do so, it’s a decidedly strange feeling. Your hands hover over the wheel for a few seconds, waiting to grab it if something goes wrong. Except nothing goes wrong. Freightliner engineers designed Highway Pilot to be extremely fluid and smooth in its movements. There is no jerking or jarring of the steering wheel. The system is almost silky smooth.

We were dealing with pretty significant cross-winds during my drive. And one particularly strong gust pushed me onto the rumble strip on the edge of the road when I was actually steering the truck. At that point, I engaged Highway Pilot and watched as it smoothly steered the truck back into its proper lane. The system reacts to wind gusts far quicker than a human driver can, and responds with fluid movements far removed from the half-panicked jerk of the steering wheel most drivers would instinctively make.

Disengaging Highway Pilot is a piece of cake. You can simply turn off the switch located on the steering wheel, take hold of the wheel and start driving yourself, or pump the brake pedal as you’d do to kill cruise control.

Should any of the Highway Pilot systems determine that they are not getting solid information to safely drive the vehicle, an alarm sounds, and a red-colored, 5-second countdown clock flashes on the driver information screen prompting them to take control. If the driver does not take control once the countdown ends, Highway Pilot will immediately begin slowing down, eventually pulling off the road and coming to a complete stop. Regardless of how poor sensor input is, the system never relinquishes control of the vehicle until it is certain that the driver has taken over driving duties and is in full command of the vehicle.

Highway Pilot works and it works well. It doesn’t simply drive the truck, it leverages Detroit’s DT12 AMT to consistently deliver optimal fuel economy at all times. Headlines aside, at its core Highway Pilot is simply a highly-advanced cruise control system that never gets tired or loses its focus.

Diane Hames, general manager of sales and marketing for Freightliner, says the entire focus of Highway Pilot is to assist drivers, not replace them. The system is designed to relieve drivers from tedium and unrelenting focus and allow them to rest for extended periods while still staying in command of the truck.

Highway Pilot is still undergoing extensive real-world validation testing on tracks and public roadways in Nevada. No official timetable has been set for putting Highway Pilot into production. But if my time behind the wheel of the Inspiration Truck taught me anything today, it’s that this technology works exactly as advertised and has great potential for boosting fleet fuel economy, safety and easing driver workloads. 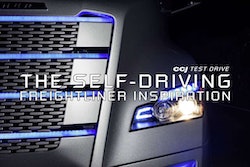 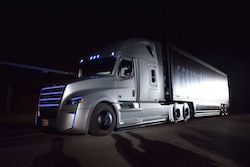 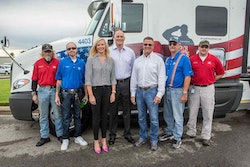