Strikes ended at three of the four Los Angeles port companies under protest by truckers, while the city’s Council has approved a measure asking port employers to adhere to labor laws for drivers.

Truckers for XPO Logistics, Intermodal Bridge Transport and Gold Point Transportation ended their five-day strike Oct. 30. The Teamsters union, which organized the protests, says these companies have misclassified truckers as independent contractors instead of employees. That day, the LA City Council unanimously passed a resolution asking LA and Long Beach drayage companies to comply with labor laws and port stakeholders to try and prevent strikes.

Drivers from Pacific 9 Transportation have been on an indefinite strike for weeks.

On Oct. 30, California Cartage’s warehouse workers ended a short strike just as 14 drayage drivers filed $3.5 million in wage-and-hour claims with the California Division of Labor Standards Enforcement. Another 19 of these claims are already being processed.

Before last week, truckers had filed 705 wage-and-hour division claims. So far, the DLSE has issued 155 orders, decisions or awards, 113 of which were deemed misclassified, resulting in back wages and penalties.

Additionally, there are another 21 class action lawsuits affecting 3,000 current port truckers. The U.S. Department of Labor and the California Attorney General have filed misclassification lawsuits against some of the state’s port trucking companies.

Next week, a delegation of striking drivers plan to deliver petitions protesting misclassification to the mayors of Long Beach and LA. 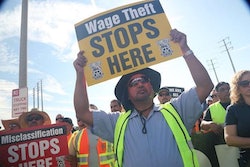