UPS Freight (No. 1 on the CCJ Top 250) president Jack Holmes has announced he will retire this year, effective June 30, after 37 years with the company.

Rich McArdle, most recently UPS’ Mid-Atlantic District Manager, has been promoted and will assume responsibilities as president of UPS Freight in June.

Holmes started with UPS in 1979 as a package handler in the Metro Philadelphia District, and he became a package car driver in 1983 before being promoted into management the next year. He was named UPS Freight’s president in 2007.

“Jack’s contributions to UPS and the trucking industry are immeasurable,” said Myron Gray, president of U.S. operations for UPS. “His strong leadership, deep industry knowledge and professional counsel have educated and inspired countless UPSers and others who have worked with him throughout his career.”

McArdle began his career with UPS in 1982 as a part-time employee loading package cars in Kentucky. In 1985, he was part of the UPS team that initiated international air service between the U.S. and Europe. McArdle went on to develop plans for further expansions to Canada, Japan, Southeast Asia and Central America. In 2010, he began an assignment in UPS’s public affairs office in Washington, D.C., before taking on his current position as Mid-Atlantic District Manager in 2015. 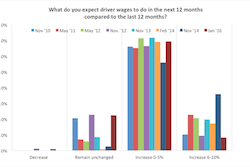