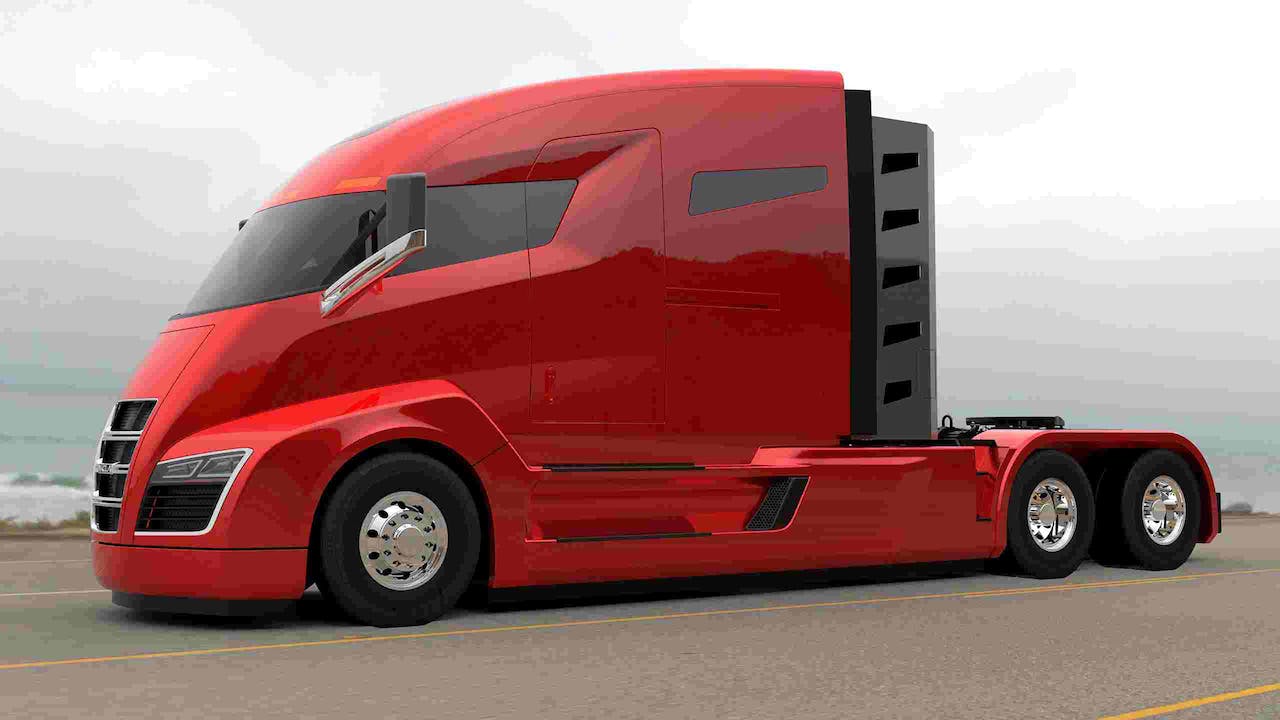 Nikola Tesla – renowned inventor, electrical and mechanical engineer, physicist and futurist – is best known for his contributions to the design of the modern alternating current (AC) electricity supply system, and as a genius rivaled only by the likes of Thomas Edison.

An automobile company named in his honor, Tesla Motors, is poised to revolutionize America’s highways. Another similarly named company, Nikola Motor Company (NMC), seems poised to do the same for transportation.

Trevor Milton founded his company to design and manufacture electric vehicles, energy storage systems and electric vehicle drivetrain components. With the first working prototypes expected to be displayed to the public later this year, the company plans to soon launch a 2,000 horsepower electric semi-truck, Nikola One.

The company says Nikola One is capable of pulling a total gross weight of 80,000 pounds and offers more than 1,200 miles between stops. The majority of the truck’s components are being developed by NMC, but the company turned to Meritor for help in co-designing the industry’s first-ever independent suspension.

“By working together with some of the top engineering firms in America, we were able to design vehicles that have previously been thought impossible to design,” Milton says. “We want to even the playing field and income inequalities seen between owner operators and fleets for the first time in recent trucking history. This is just the beginning of what’s ahead for America, our company and the electric vehicle market.”

“Torque is instant with an electric motor,” Milton says. “There is a short window of RPM that you can get good torque from a diesel engine. The electric motor is basically providing 100 percent torque all the time.” 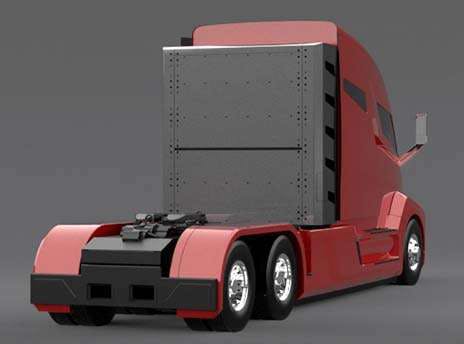 This Nikola One model is spec’d with a 150 natural gas tank behind the cab.

By removing the diesel engine and transmission, and manufacturing the cab out of lighter carbon fiber panels, the truck builder says it was able to install many of Nikola One’s heaviest components at or below the frame rail, lowering the center of gravity and improving safety.

“Nikola One actually weighs about 2,000 pounds less than a regular diesel (21,000 pounds),” he says, “because we removed engine, the transmission, the drivetrain and all the liquids that go in those. All the batteries actually weigh less than the diesel engine does alone.”

Additional benefits of removing the diesel engine, Milton says, include the reduction in greenhouse gas emissions, a larger and more aerodynamic cab and a quieter and more comfortable ride.

Without a transmission, the only thing needed to make the Nikola One go or stop is the electric pedal and brake pedal.

“No shifting whatsoever,” Milton says, adding Nikola One’s simplified operation will open up the line haul market to a new group of drivers.

Nikola One’s electric motors are powered by a liquid cooled lithium-ion battery pack, which is charged by an onboard turbine. The fuel agnostic turbine automatically charges the batteries when needed, eliminating the need to plug in the unit. The turbine, Milton says, burns about 25 gallons of fuel per hour and, when coupled with the batteries, gives the truck a range of about 1,200 miles between stops and fill ups.

Going downhill, the Nikola One’s six electric motors absorb the braking energy normally lost and deliver it back to the batteries.

Because there is an electric motor at each wheel, the Nikola One’s software provides dynamic control to each wheel. Torque vectoring controls the speed and torque of each of the six wheels independent of each other at any given moment.

Each of the features will be powered by the truck’s 320 kWh battery pack, alleviating the need to idle or run a separate generator. NMC claims the driver could theoretically stay in the cab with all the amenities on for almost a week without draining the batteries enough to initiate the turbine charge.

Milton says the truck’s operational cost per mile is somewhere between 20-30 cents per-mile, roughly half of most diesel-powered semis.

The Nikola One’s proprietary hardware and software also features platooning capabilities. Once testing is complete and government regulations allow, a single Nikola One driver will have the ability to virtually hitch and lead up to five driverless Nikola One trucks through NMC’s wireless vehicle network and self-driving technology.

“[The lead driver will] send a command and within 30 milliseconds it goes straight to the motor,” Milton adds of the response time of the platoon. “If for whatever reason the trucks experience a communication failure, the trucks would pull over as soon as it was safe to do so.”

Virtual Hitch/Fleet Convoy technology is part of the truck’s hardware, and Milton says every Nikola One will come with it built in.

Milton says he expects truck deliveries to begin in the next 24-36 months. He wouldn’t disclose the number of trucks on order, only calling it “substantial.”

The first truck has been built and it is currently being tested internally. It will then undergo regular field trials to validate the technologies used. 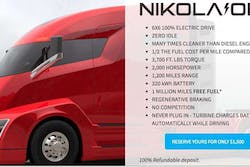 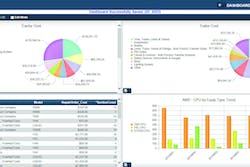