Once again making clear the sometimes wide divide between large and small carriers on some of the industry’s key regulatory and operational issues, Todd Spencer of OOIDA and Ted Scott of ATA spoke in a point-counterpoint session May 17 at CCJ’s annual Spring Symposium in Birmingham, Ala., butting heads over electronic logging devices, speed limiters, allowing 18-21 truckers to drive interstate and more.

The pair agreed, however, that to solve the country’s widespread truck parking shortage, a unified effort is needed by the industry to push both public and private initiatives to expand the number of available truck spaces on major freight corridors.

On the coming electronic logging device mandate, Spencer, head of regulatory affairs for the Owner-Operator Independent Drivers Association, continued to toe his association’s line: The mandate places a greater compliance burden on owner-operators than it does larger carriers and, he says, constitutes a violation of drivers’ constitutional rights to privacy.

“We think it should be a business decision, not a government mandate,” he said. “The mandate certainly does not satisfy any reasonable cost-benefit analysis. The cost goes to the little guys, and the benefit goes to the big guys. We should demand better than that.”

Scott, head of engineering for the American Trucking Associations, rebutted Spencer’s points about small carriers and owner-operators bearing the bulk of the rule’s costs, saying ELDs cost the same for large carriers as they do small. Moreover, he said, claims that small carriers are against ELDs is “completely untrue.”

“ATA and its membership, both small and large carriers, are generally very happy with the rule and support it,” he said.

Scott also touted the safety and productivity benefits of ELDs, saying analysis done by ATA members shows ELDs allow drivers to spend more time during their 14-hour clock driving rather than filling in a log.

Relative to speed limiters, Scott told Symposium attendees that “speed kills,” saying the coming speed limiter mandate proposal from the DOT will enhance highway safety. ATA hopes to see a rule that sets a 65 mph limit on heavy trucks. The rule has been hung up in the regulatory process for about a year now, however, and Scott says he doubts the proposed rule will be published before Scott Darling’s confirmation by the Senate as the head of FMCSA.

Spencer, however, decried the mandate, saying the speed differential between trucks and passenger cars will hurt safety. And the likelihood of on-highway “rolling roadblocks” will increase, he said, another knock against safety.

Spencer cited research by a former Chief Safety Officer with the National Highway Traffic Safety Administration, saying the agency’s studies showed highways are safest when vehicles are maintaining the same or close to the same speeds.

“If you set them lower, it doesn’t make highways safer,” he said. “It’s like the people that said we should never do away with the 55 mph limit [from the 1980s]. They all said ‘We’re going to have carnage on the highways’ if speeds increased, and the exact opposite happened.”

Scott disagreed. Enforcement groups have a hard time reining in speeding, he says, and a mandate is needed to keep trucks traveling at lower, safer speeds. “Wyoming now leads the nation in speed related deaths,” he said. “They’ve got a speed limit now of 80 mph on their highways.”

On parking, the two generally came to a consensus — Government initiatives and federal funding are going nowhere. Despite millions of dollars in federal funding designated for truck parking, state DOTs do not use the money to build new spaces. “We have seen FMCSA and the Federal Highway Administration squander $40 million in federal money” on alert systems that do little to help fix the problem, Scott says.

The two also agreed that shippers need to play a greater role by opening their facilities to overnight truck parking. “We probably need to push that more than we do,” Scott said. “Some of the shippers out there do make provisions for drivers. They will open a gate early and let them into sleep until they can get to the dock.”

Spencer, however, cited examples of just the opposite: Shippers locking drivers out of their facilities and leaving them to park in nearby abandoned gas stations or other facilities. He cited two grisly examples of truckers being told by shippers to leave, finding an abandoned lot and then being awoken and murdered in the middle of the night.

The two examples, one of which being the story of Jason Rivenburg, have prompted greater national efforts to study parking and try to find solutions. So-called “Jason’s Law” provisions were included in the 2012 MAP-21 highway funding bill.

Spencer says state or federal laws should require shippers to have designated overnight parking spaces for truckers. “The city and state tell us how many handicap spaces we have to have” at a facility, he said. “Every shipper or receiver facility that accepts and receives trucks needs to bear some kind of responsibility. How do we get there? We’re raising the issues now.” 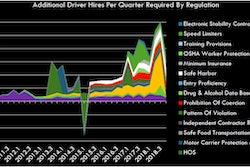