The House’s Appropriations Committee voted Tuesday to send to the full House a Department of Transportation funding package that would permanently restore 2011 regulations pertaining to truckers’ use of a 34-hour restart.

The bill also would halt the DOT’s work on its proposed Safety Fitness Determination rulemaking and would prevent states from enforcing any state-enacted laws governing state-enacted breaks for truckers.

Despite strong vocal opposition to all three major trucking measures during the committee’s meeting and an amendment brought to strike all three in one swoop, the controversial trucking-related riders made the cut.

The hours provisions do not tie the future of hours of service rules to a study currently being conducted by the Federal Motor Carrier Safety Administration, as Congress has called for in previous years.

The House’s hours reform, however, are a departure from the proposal that passed the full Senate last week. In its 2017 DOT funding bill, the Senate puts the ongoing FMCSA study front and center. The study’s conclusions would dictate the future of hours of service regulations, if the Senate bill prevails.

Under the Senate bill, if the agency’s study determines 2011 rules regarding truckers’ 34-hour restart are better for trucker fatigue, then such rules would take effect permanently, albeit with a new 73-hour limit on the amount of hours truckers can spend on duty in a rolling seven-day period.

If the FMCSA study finds July 2013-enacted rules are better for fatigue, then they would go back into effect, and the 73-hour cap would be forgone, according to the Senate legislation. The July 2013 rules require a 34-hour restart to include two 1 a.m. to 5 a.m. provisions and limits its use to once weekly.

Relative to other trucking-specific riders in the bill, its Safety Fitness Determination provision would block FMCSA from continuing to pursue a new rule to alter the way it rates carriers and determines whether they’re safe enough to operate, at least temporarily. The House bill would require the agency to implement widespread reforms to its Compliance, Safety, Accountability program before resuming work on the SFD rule.

The agency published a proposed version of the rule in January, and it’s since faced a sharp backlash from industry stakeholders and from some lawmakers, given its heavy reliance on the Safety Measurement System rankings in the CSA system.

Congress required FMCSA to remove the SMS percentile rankings from public view last year with the passage of the FAST Act highway bill. It also required the agency to work with government accountability offices to develop and implement a plan to revamp the program and fix its myriad of problems.

The agency’s proposed Safety Fitness Determination rule, however, calls for greater use of the SMS scores to determine a carrier’s safety fitness to operate. The House legislation directs the agency to suspend work on the rule until the CSA reforms are enacted.

The Federal Authority provisions come in response to court rulings made in recent years upholding meal and rest break laws for truckers, particularly in California, though roughly 20 states nationwide have such laws on the books. Proponents of the measure say it prevents the trucking industry from dealing with a “patchwork” of state regulations and asserts the federal government’s authority in governing transportation workers, as spelled out by the 1994 Federal Aviation Administration Authorization Act.

The House bill and its trucking provisions still have several major hurdles to clear before becoming law, however. The bill must still come to the House floor for a vote and face amendments there that could strip one or more of the trucking provisions from the final text.

The bill in its entirety devotes roughly $60 billion to fund the Department of Transportation in the 2017 fiscal year, granting FMCSA about $600 million.

Correction: An earlier version of this story said the Federal Authority provisions in the House bill also blocked state efforts to enact driver pay reforms. The bill in fact does not include those provisions. The Federal Authority measures only pertain to barring states from enacting state-required breaks for truck drivers. 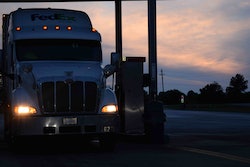 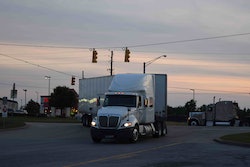