The U.S. Senate overwhelmingly passed a transportation funding bill Thursday, May 19, that could change hours of service rules for truck operators, should the House also pass the bill and the president sign it.

The bill’s hours of service-related provisions would tie the future of hours of service rules to the outcome of a pending Federal Motor Carrier Safety Administration study in the works since early 2015.

The two outcomes are (1) a return to 2013-enacted rules governing truckers’ 34-hour restarts or (2) a return to 2011 restart rules, albeit with a new 73-hour cap on the amount of hours truck drives can remain on duty in a seven day period.

An amendment floated this week by Sen. Richard Blumenthal, which would have simply restored the 2013-implemented restart rules, was not brought to the Senate floor for a vote.

The bill, the 2017 FY Transportation and Housing and Urban Development appropriations bill, passed Congress’ upper chamber as-is by an 89-8 vote.

Despite the Senate’s passage of the bill, the hours of service changes have a long way to go before becoming law. The measures also face stiff opposition in the U.S. House, which just this week floated an alternative plan. The House plan would remove the FMCSA study from the equation and simply revert the rules governing the use of a 34-hour restart to those in place in 2011 and currently in place now.

Under the House plan, truckers’ 34-hour restarts would not need to include two 1 a.m. to 5 a.m. periods, and the frequency of a restart’s use would not be limited.

Under the Senate’s plan passed May 19, however, two paths are offered for hours of service rules.

If the FMCSA study concludes 2013’s restart rules are better for safety and trucker fatigue levels, then the requirement that a restart include two 1 a.m. to 5 a.m. periods would return, as would the once-weekly limit to the restart’s use.

Should the study find the opposite — that truckers’ operate more safely under 2011’s restart rules — then the new 73-hour cap would kick in, meaning truckers could only be on-duty 73 hours in a seven-day period. According to the bill’s text, the seven-day period “moves forward one day at midnight each day.”

The legislation, in addition to its uphill battle in the U.S. House, also faced this week a veto threat by President Obama, who cited the hours of service changes as one of the reasons he’d consider vetoing the legislation.

In addition to the hours changes in the bill, the Senate also set a within-six-months deadline for the publication of the DOT’s proposal to mandate speed limiters on heavy trucks.

The bill also assigns federal funding to the study and deployment of autonomous vehicles. 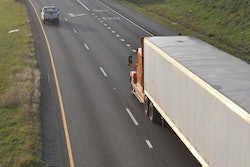