Volvo AB cut its outlook for the North American truck market when the company released its second quarter earnings Tuesday.

Volvo’s North American truck orders dropped 29 percent in the second quarter, and the Gothenburg, Sweden-based company shaved 10,000 trucks from its most recent forecast adjustment – down to 240,000 units for the year and 20 percent fewer than last year.

“Despite a positive development in Europe, total deliveries of trucks decreased by 5 percent mainly due to a weakening in North America and continued low demand in South America and other emerging markets,” says Martin Lundstedt, company president and CEO. “Lower net sales had a negative impact on profitability, but thanks to lower costs and good volume flexibility, the truck business had an operating margin of 10.0 percent excluding the EU provision.”

Volvo has been ramping down truck production production cuts and announced another round of layoffs at its Dublin,Va., truck assembly plant Monday.

“The correction in the North American market continued in the second quarter and the total North American retail market for heavy-duty trucks decreased by 14 percent a as of June,” the company wrote in its earnings release. “A continued good development in the economy, low fuel prices and low interest rates support the market, but with stagnant freight volumes, increased availability of competitively priced used trucks and less need for fleet renewal, the market is expected to settle on a more normal level during 2016.”

Profit margins from the company’s truck unit fell to 5.5 percent, down from 11.5 percent a year ago.

Volvo reported a net income from April to June of $230 million, down from $600 million in the same quarter a year earlier. 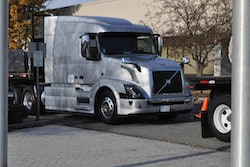