Former White House Chief of Staff: Trucking must be united in presidential election

As the U.S. enters the homestretch of one of the most unsettling presidential elections in the country’s history, it’s important for the voting public to engage in the electoral process.

“It is our government. Don’t blame anyone else for the performance of the government other than those who don’t participate in it,” Andrew Card, president of Franklin Pierce University and former Secretary of Transportation under George H.W. Bush told a crowd gathered for the opening session at the ATA Management Conference & Exhibition in Las Vegas Monday. “I’m saying get out and vote.”

“When you pick someone to be the president, they are personified by Article 2,” Card says.

Card, who served as George W. Bush’s chief of staff, said he watched the younger Bush come into his own as he delivered the news of the Sept. 11 attacks to the Commander in Chief while he spoke to a group of elementary school children.

The 2016 presidential campaign has been marred by lack of convention, in everything from campaign strategy to the candidates themselves. But Card says it’s important to educate yourself and follow your inner moral compass to the ballot box.

“I grew up in a family where we were expected to follow what was going on in government and pay attention … and support the people and the causes that we thought were right.”

Card says it’s important for trucking stakeholders to band together and vote the industry’s interests and costs, emphasizing the word ‘we’ and the power it represents in picking a leader.

“We need to help Congress shape and pass a good bill,” ATA president and CEO Chris Spear echoed in his remarks, “and that may involve some compromise. Yet I believe that can done without sacrificing ones’ conviction.” 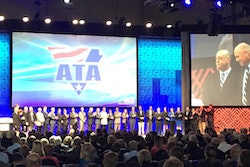 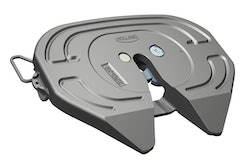 SAF-HOLLAND will be fifth wheel standard on International trucks