The fast-approaching Nov. 8 federal elections likely won’t disrupt the implementation of the recently finalized Phase 2 emissions regulations for tractor-trailers, set to be phased in over the next 10 years.

The best odds for such a scenario are for Donald Trump to win the presidency and for Republicans to maintain control over both chambers of Congress, says Glen Kedzie, head of energy and environmental counsel for the American Trucking Associations.

In that scenario, Congress would need to pass what Kedzie called “a rare bird” — a Congressional Review Act resolution. CRAs can be used by Congress to block rules developed by executive branch agencies, such as the EPA and the DOT, the two departments that produced the Phase 2 emissions regulations. If Congress successfully passed a CRA, the president (in this case Trump) could sign it and Phase 2 emissions regulations would be nullified.

Since its 1996 passage, however, the CRA has only been successfully used once, and lawmakers could be reluctant to try to pass a CRA, as Phase 2 emissions were developed jointly by two agencies and Congress called for the regulations in the first place. Also, overturning the regulations would prompt a wave of lawsuits, Kedzie says.

Outside of a Republican sweep of the Senate, House and White House, there’s little chance the rules can be touched.

If Hillary Clinton wins the White House, she would veto any CRA passed by Congress relative to the emissions standards, and Congress would then need a supermajority to override the veto — a long shot even in a Republican-controlled Congress.

If either branch of Congress swings in favor of the Democrats, the chance of Phase 2 emissions being struck is effectively none. 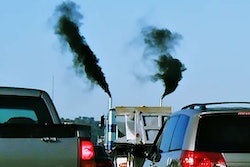