Companies and industries that are mired in solving present-day challenges and blind to coming paradigm shifts from outside forces are at risk for becoming obsolete, warned Troy Clarke, chairman, president and CEO of Navistar. Clarke’s remarks came during a luncheon address at the 2017 Technology & Maintenance Council Annual Meeting and Transportation Technology Exhibition in Nashville.

“At best, a paradigm shift is a moment that resets everyone to a new starting position,” said Clarke. “But when you don’t see it coming you’ll be left behind. Entire industries are put at risk by new players that are able to change the status quo.”

Clarke challenged audience members to develop a vision for what the trucking industry will look like in 2030 and to be receptive to changes in freight distribution patterns and engine power.

“Trends in economics and demographics suggest we are on the edge of major paradigm shift,” said Clarke. “The cost of reducing greenhouse gas emissions and oxides of nitrogen is going up. And that is going to increase the cost of trucks. Our investments are getting to the point of diminishing returns. The majority of improvement will come at front end and the majority of costs will come on the back end, costing the industry between $30 and 40 billion.”

Citing recent trends in European cities creating low- or no-emissions zones in urban areas, Clarke said we will see similar regulation at the city level by 2030 and suggested that electrified trucks may be the best way to move freight into urban centers.

As investments in battery technologies continue and they become more affordable, Clarke said the price of Lithium-Ion batteries are expected to drop from 300 kilowatt hours to 110 to 130 kilowatt hours by 2025. “That would put electric trucks at a point of parity with diesel trucks in many applications,” he said, adding that electric vehicles are easier to maintain and have only one-hundredth the amount of moving parts as today’s cars and trucks.

As urban centers become more resistant to diesel-powered vehicles, Clarke’s vision for trucking in 2030 includes a hub-and-spoke system where heavy loads are carried between distribution centers on the nation’s highway system with diesel-powered trucks and then broken down into smaller loads for urban delivery using electric trucks.

In 2030, “New vehicle technologies will make [diesel-powered trucks] more efficient,” said Clarke. Vehicle-to-vehicle communications will allow different brands and makes of trucks to link together in platooning operations. Vehicle-to-infrastructure technology will improve utilization by regulating speed to avoid congestion and reduce risk of accidents,” adding that a major reduction in accidents because of new technologies could lead to fewer structural protection requirements that would allow heavier loads or better fuel economy.

Clarke also cited a recent wave of existing trucking technology that is already helping mitigate some of the challenges the industry will face in the future. With the aging baby boomer generation, there will be 15 million more drivers between the ages of 71 and 80.

“Many will have diminished vision and hearing and will pose added risks for themselves and our drivers and trucks,” said Clarke. “The advent of advanced driver assistance systems show a great deal of promise to help keep our drivers safe. Data shows these systems do work and can reduce accidents by 70 to 90 percent and the severity of the remaining accidents by 70 to 80 percent.”

The challenge, Clarke said, is how the trucking industry will adapt to all these changes to claim its stake in the future. “Given pace of change in technologies and all the new players involved in recent years, the changes ahead won’t be small and incremental. Those companies that see the paradigm changes coming will be the ones that win.” 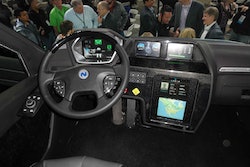 Nikola One shows the future of the connected truck 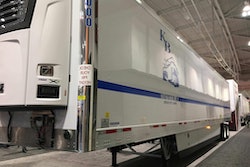