The U.S. Supreme Court could decide as early as June 8 whether it will hear the Owner-Operator Independent Drivers Association’s lawsuit against the federal government’s rule to mandate use of electronic logging devices for truck drivers.

Paul Cullen, the attorney representing OOIDA and truckers Richard Pingel and Mark Elrod in the case, said the Supreme Court’s justices will conference on June 8 to review OOIDA’s petition asking the court to take up its case. It will review the arguments presented by both sides in the case, Cullen said.

Other than deciding whether or not to hear the case, the justices could also seek more information from either OOIDA or the Department of Transportation, the defendant in the case, to help make their decision. That scenario could delay the justices’ decision about the petition, Cullen says.

OOIDA filed its suit last March, urging the courts to overturn the rule. OOIDA argues the rule does not meet stipulations set by Congress for an ELD mandate and that ELDs violate truckers’ Fourth Amendment rights to privacy and protection against warrantless searches. The case, OOIDA argues, carries broad implications, even outside of trucking, regarding technology and personal privacy.

So far, however, the courts have disagreed with OOIDA’s assertions. The 7th Circuit Court of Appeals ruled in favor of the DOT and its Federal Motor Carrier Safety Administration in the case in a decision issued October 31. OOIDA also lost its bid for an appeal at the 7th Circuit level.

However, the group has persisted in its pursuit to overturn the rule, filing in April a petition with the nation’s high court to hear its challenge. 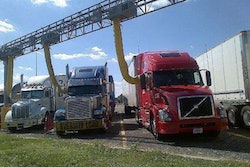