Following incremental steps toward such a study in recent years, the Federal Motor Carrier Safety Administration will formally announce Tuesday a pilot program intended to gauge the feasibility and safety aspects of adding split sleeper berth options to hours of service regulations.

FMCSA says it seeks at least 200 drivers to participate in the study. Drivers will be studied for up to 90 days, per a Federal Register entry slated for publication June 6.

Researchers will study the 200 (or more) drivers in their normal operations. However, drivers will be free to split their sleeper berth time into two segments of “any combination..totaling 10 hours.”

“Drivers would be able to use split or consolidated sleep schedules as they choose,” the agency says, “but they still must meet the daily minimum rest requirements.”

FMCSA is soliciting carriers and drivers to participate. Those interested in participating should visit sleeperberthstudy.com to complete an application, take a questionnaire and provide written consent to be studied.

The agency has not said how long the data collection phase will last in sum, only saying individual drivers will be studied for up to 90 days. It also did not say how long it would take to produce conclusions based on the data gathered.

Public comments about the study are being accepted for 60 days, giving carriers and drivers the chance to provide the agency with input about the study and how it should proceed. The comment period opens Tuesday and will be available at the regulations.gov rulemaking portal via Docket No. FMCSA-2016-0260. 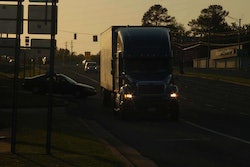 Two informational ELD webinars to be held this week