Four more exemption requests from the electronic logging device mandate have been filed by three associations whose drivers operate within the trucking industry, and one of the nation’s largest intermodal fleets.

The Federal Motor Carrier Safety Administration also announced it has denied an ELD exemption request from the Pipe Line Contractors Association (PLCA) that was filed in July.

One new ELD exemption request comes from the Motion Picture Association of America (MPAA). Another new one is from the Western Equipment Dealers Association (WEDA) on behalf of itself and seven other agriculture equipment dealer associations. Additionally, the National Pork Producers Council (NPPC) has requested an exemption from the mandate on behalf of several livestock-hauling groups due to what it calls “an incompatibility” between federal hours rules and how the livestock industry operate. Finally, Hub Group Trucking (No. 30 on the CCJ Top 250) is also requesting an exemption from a portion of the ELD mandate regarding the grandfather period of AOBRDs.

FMCSA is seeking input from the public on the requests.

MPAA’s request is to allow truckers hauling equipment for theatrical, television and movie production sites to use paper logs at all times rather than ELDs. The group says it is seeking the exemption because drivers often work for different studios and production companies, who may use different ELD providers that are incompatible with each other. Therefore the drivers would be unable to transfer ELD data from one carrier or vehicle to another. MPAA says that allowing its drivers to continue keeping paper logs “will not jeopardize operational safety or increase fatigue-related crashes.”

The group says the approximately 6,500 drivers who operate within their industry often spend less than four hours a day driving and average 40 miles per day. It says few of the drivers qualify for the short-haul log-keeping exemption because many of them already operate under an exemption from typical hours-of-service driving and on-duty time limits.

Comments on this request can be made here through Nov. 27.

WEDA’s exemption request would apply to agriculture dealers who often transport farm equipment to and from the dealerships for farmers and ranchers, usually within 150 miles of the dealerships.

The group says the approximately 6,000 dealers included in the request already operate under an exemption that is separate from the short-haul exemption in which equipment dealers are exempt from log-keeping regulations during state-defined harvest and planting seasons while transporting farm supplies for agricultural purposes from the dealership to a farm within a 150 air-mile radius. The exemption, however, doesn’t cover transportation of equipment from a farm to a dealership for repairs.

WEDA says the ELD rule creates confusion because, depending on the state definition of harvest and planting season, a dealership may be required to install ELDs for only a couple of months each year. Additionally, the group says there is also confusion as to whether the short-haul exemption applies on trips from farms to dealerships, if the farms are within 100 miles of the dealership, since the agribusiness exemption does not cover the trips back to dealerships.

Because of the confusion, WEDA says its dealers will likely install and utilize ELDs to ensure they avoid penalties and potential shutdown orders. As a result, the group says dealers will have shorter hours of operation when hauling equipment to and from farms, which in turn will cause increased costs and downtime for farmers and ranchers.

Comments on this request can be made here through Nov. 27.

NPPC’s request states livestock haulers are not and will not be prepared to meet the Dec. 18 compliance date because, in part, the current ELD marketplace doesn’t meet the needs of livestock haulers. The group adds that it’s unclear as to whether current ELD devices can accommodate hours-of-service exemptions utilized by the livestock industry.

The group says in its request ELD vendors “lack an understanding of the unique needs of the livestock industry and essential design features for their products,” and adds that most of the drivers who haul livestock are above the trucking industry average of 49 years old and are “less familiar with the use of new technology and require more time to train on ELD use.”

NPPC says the exemption would maintain or exceed current safety because most livestock haulers have participated in specialized training, which address driver safety and provide instruction on how to handle and transport animals.

FMCSA is seeking public comment on the exemption request, which can be made at www.regulations.gov by searching Docket No. FMCSA-2017-0297 for 30 days after the notice is published in the Federal Register on Tuesday, Oct. 31.

Hub Group Trucking’s request asks FMCSA to allow it to install an AOBRD in any new truck added to its fleet after the ELD compliance date until a full fleet transition to ELDs can be completed. The company says it plans to add at least 160 new trucks and drivers to its fleet in 2018, and the exemption, if granted, would cover these trucks and drivers. HGT says its entire fleet has been using AOBRDs since 2010.

The ELD mandate states fleets using AOBRDs have until Dec. 16, 2019, as long as they were already installed in trucks before the Dec. 18, 2017, compliance date. FMCSA, in a FAQ section on its website, says fleets that purchase new trucks after the Dec. 18, 2017, deadline can install an AOBRD in the new truck only if that truck replaces an old truck. New AOBRDs cannot be installed in new trucks that don’t replace old tractors.

FMCSA is seeking public comment on the exemption request, which can be made at www.regulations.gov by searching Docket No. FMCSA-2017-0277 for 30 days after the notice is published in the Federal Register on Tuesday, Oct. 31.

Finally, FMCSA announced its decision to deny the ELD exemption request made in July by the Pipe Line Contractors Association because the group did not demonstrate how it would maintain the same level of safety without using ELDs. 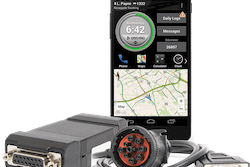