The House in late December stamped approval on a two-bill package aimed at cracking down on human trafficking in the U.S., sending the bills to President Trump to sign into law. The Senate passed the bills in September, and Trump said this week in a proclamation that he intends to sign the bills in January.

The No Human Trafficking on Our Roads Act will permanently disqualify anyone convicted of a human trafficking violation involving a commercial vehicle from holding a CDL.

Its sister bill, the Combating Human Trafficking in Commercial Vehicles Act, will establish a human trafficking prevention coordinator within the U.S. DOT. The bill will also boost outreach, education and reporting protocol within the Federal Motor Carrier Safety Administration. It also will provide funds to CDL schools to implement anti-trafficking education. 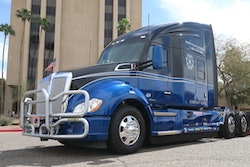