Truckers Against Trafficking has launched a campaign aimed at reducing the demand for buying sex, which would in turn lead to the elimination of sex trafficking, TAT says.

The new “Man to Man Campaign” asks truck drivers one question – “why don’t you purchase commercial sex?” The answers to that questions from truckers are the forefront of the campaign and will be used on TAT’s website, on social media pages and on banners at speaking engagements across the U.S. The banners will also be on display with TAT’s Freedom Drivers Project, the touring tractor-trailer exhibit about human trafficking that stops at trucking events.

The campaign hopes to bring more attention to the buyers of commercial sex, because without the buyers, there are no victims and no more human trafficking, TAT says.

“At the very root of the sex trafficking and sexual exploitation epidemic sweeping our nation and world is the demand,” said Truckers Against Trafficking Deputy Director Kylla Lanier. “The prostituted person, and more recently, the traffickers have been the focus of attention and arrests, while the buyer goes home with a warning. This must change. Traffickers meet the demand for commercial sex by luring their victims into this life and keeping them there through force, fraud or coercion. If there were no money to be made, they wouldn’t pursue this criminal activity.”

Lanier adds that when the demand for commercial sex ends, sex trafficking will end. “When all is said and done, if there is no buyer, there would be no victim.”

According to results from a national survey by Demand Abolition, 20 percent of adult men ages 18-64 have bought or would consider buying commercial sex if the circumstances permitted. Additionally, 35 percent of men have searched online sex ads but not engaged in the transaction, according to the survey results.

Joining TAT in the campaign are the American Trucking Associations, Demand Abolition, Businesses Ending Slavery and Trafficking, UPS and Walmart. 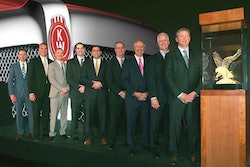