The Georgia Department of Transportation is currently in the planning stages for trucks-only lanes south of Atlanta on I-75, which the state says are intended to reduce freight congestion around the city.

The proposed lanes would allow trucks and other commercial vehicles to travel in barrier-separated lanes from four-wheel traffic. The preliminary proposal has the lanes going northbound from approximately the I-75/I-475 interchange near Macon to the McDonough area just south of Atlanta.

The Atlanta area is home to seven of the American Transportation Research Institute’s top 100 freight bottlenecks, including the I-75/I-285 interchange at No. 4. While the proposed lanes don’t extend all the way to this interchange, anything that eases congestion in the area will lead to an overall improvement, says Rebecca Brewster, president and chief operating officer of the American Transportation Research Institute.

“Anything that will improve the truck flow into Atlanta will be an improvement all the way around,” Brewster says. “This is one of many projects GDOT has on the books to improve congestion and traffic flow in and through Atlanta.”

A 2016 study for GDOT by Cambridge Systematics estimated the proposed lanes would reduce delays in this area of I-75 by 40 percent by 2030.

“By moving forward with this project, by 2030, building these lanes will cut down on congestion in this corridor by 40 percent,” says Natalie Dale, media and government relations liaison for GDOT. “That includes estimates for growth of the port and local communities. Having a 40 percent reduction on top of growth in 12 years is significant.”

While studies on trucks-only lanes have been done in other states, namely along the I-70 corridor, Georgia is the first state to get this far into the planning process. Dale says Georgia is the ideal state to try commercial lanes because of the state’s challenges with congestion from commercial vehicles and commuters, along with freight coming from the Port of Savannah.

“This section of I-75 is sort of the primary corridor to and from the port,” Dale says. “This is a very heavily freight-trafficked area, and it’s already well beyond capacity. We’re already in a position to add capacity to this stretch, regardless of whether or not it’s with commercial vehicle only lanes, but in adding capacity, we need to do so in a smart and innovative way.”

Dale says that while GDOT is still in the pre-project stage right now, the idea is to have two northbound dedicated trucks-only lanes, non-tolled, separated by a concrete barrier. Southbound lanes could be added in the future, she adds.

“We’ve heard people asking why we’re starting with the northbound lanes,” Dale says. “The simple answer is getting freight coming from the port where it’s going in a timely manner. We feel there is more flexibility for trucks getting back to the port.”

Brewster says having the separated lanes will help both truckers and commuters.

“To have separation from four-wheelers improves the situation for both populations,” Brewster says. “There is a lot of frustration in traffic with trucks because there are just too many vehicles in the same space. We have the opportunity to separate trucks from cars, so truckers will be driving alongside other professional drivers.”

Dale says the project was introduced along with 10 other major infrastructure projects in the metro Atlanta area, and the commercial lanes are the last project on the list. Final construction is currently expected to occur between 2025 and 2030.

If the lanes meet the expectations of congestion reduction, Dale adds that the state would look to adds similar lanes in other high-congestion areas. She also notes that the lanes could provide some insight that other states that deal with high congestion could use.

“These lanes won’t be ideal for every state, but not every state deals with freight congestion the way we do,” she says. “We hope that we’ll see some good lessons learned from this approach that we can spread throughout this state.”

Dale says the trucking industry in and around Atlanta has been “incredibly supportive” of the proposal because of the potential benefits in the ease of congestion and the safety of separating trucks from cars.

However, the U.S. Public Interest Research Group Education Fund, in a 2017 study, says the $2 billion project would be a waste of Georgia taxpayer money. The group notes there is already a proposal from the Georgia Ports Authority to create six “inland ports,” where freight from Savannah will be offloaded from trains and loaded onto trucks for regional distribution. The GDOT trucks-only lanes proposal essentially duplicates that effort, placing the cost on the taxpayers, PIRG says. 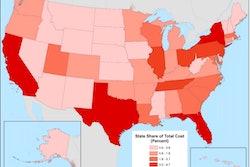