CCJ Staff (CCJ)
Mar 26, 2018
If Trump’s call for greater private investment in U.S. infrastructure come to fruition, carriers could be doling out more money for tolls. However, private funding alone is limited in its ability to solve the country’s infrastructure funding shortage, experts argue.

James P. Lamb, a former small-broker advocate and now head of the Small Business in Transportation Coalition, has agreed to settle a probe into his business dealings brought by the U.S. Federal Trade Commission, who accused Lamb and several of his businesses of cheating owner-operators out of millions of dollars over the course of several years.

Lamb denies the charges but said he agreed to settle, calling the FTC’s action a “nuisance suit.” Uliana Bogash, a business associate of Lamb’s, and Bogash’s Excelsior Enterprises will pay $900,000 to end the FTC’s litigation. Lamb says he also has closed his countersuit against the FTC. Shortly after the FTC sued him in early 2017, Lamb countersued, claiming the FTC damaged his reputation and his businesses’ revenue with the public accusations.

In a lengthy statement posted to LinkedIn, to which Lamb referred Overdrive after querying him for comment, Lamb says the FTC’s suit was a “hit job,” adding “there is nothing inherently illegal about aggressive sales tactics.”

The FTC accused Lamb and Bogash of using their businesses DOTauthority.com, DOTfilings.com, Excelsior Enterprises International and JPL Enterprises International to defraud owner-operators. The FTC claims Lamb, Bogash and their enterprises would pretend to be affiliated with the DOT or state agencies and trick owner-operators into paying unnecessary registration fees, which they pocketed.

FTC alleges that Lamb and Bogash scammed owner-operators out of $20 million, saying they used “robocalls, emails and text messages that create and reinforce the false impression that they are, or are affiliated with, the U.S. DOT, the [Unified Carrier Registration] system or another government agency,”

Lamb claims his work was legal and above-board, saying he only assisted owner-operators with DOT- and state-required business filings, such as annual UCR filings. He said it was clear that he was acting as a third-party service, not an affiliate of the DOT.

In addition to the $900,000 settlement agreement, Lamb has been “banned from misrepresenting affiliation with any government entity and from using consumers’ billing information to obtain payments without consumers’ express consent. They must also adequately disclose that they are a private third-party service provider and any fees associated with their services,” according to an announcement from the FTC.

Lamb, founder of the now-seemingly-defunct broker advocacy group Association of Independent Property Brokers of America, has in recent years advocated for stronger gun rights for truck drivers, attempted to organize protests against the ELD mandate and started the Small Business in Transportation Coalition. 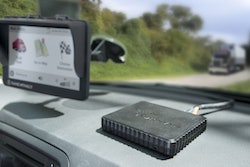 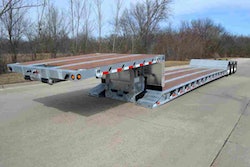