Both spot market and contract rates should continue to surge year over year through the remainder of 2018, said analysts from FTR in a webinar on Thursday, though year-over-year growth likely will moderate slightly as the supply chain adjusts to the record-tight truck market.

“Rates are not going to be going down probably for the next year,” said Avery Vise, vice president of trucking research for FTR. “They’re high and headed higher.” Vise spoke in one of FTR’s regular State of Freight webinars last week, which also featured rail analyst Todd Tranausky.

Contract rates will continue to follow the spot market rate growth seen over the past 12 months, with Vise predicting growth of 10 to 12 percent year over year. The rate gains are being driven by a simple supply and demand imbalance, says Vise, with the number of loads well outpacing available trucks.

The spot market remains hot, he said, though it’s still following normal seasonal trends. “Putting that another way, there doesn’t seem to be structural shifts in the mix of freight. It’s really just a very tight market,” he said. “There’s a lot more freight than capacity.”

The conditions driving the supply-demand imbalance likely will change little in the coming months, says Vise. Freight demand is projected to stay elevated, with the economy predicted to remain strong. Capacity “in terms of drivers and trucks” will remain short, he says, despite “a substantial number of trucks coming into fleet hands or truck dealer lots” later this year, he says. Fleets will struggle to find drivers to fill those new trucks, Vise says, mitigating their ability to increase capacity.

The one factor that could ease capacity constraints is greater efficiency in the supply chain, Vise says, such as greater use of drop and hook and efforts by shippers and receivers. “Productivity offers options,” he says. “It comes at a cost in labor and capital from shippers and receivers. It’s not their first choice to hire people to shuttle loaded and unloaded trailers around their yard. Changing schedules has implications,” but “those things that allow for greater drop and hook and better scheduling can have a major impact,” he said.

“We’re not going to see any relief from autonomous trucks this decade, so without a decline in the economy we can only incrementally improve the situation over the next year or so.”

Carriers are obviously still struggling to find drivers to help fill new trucks and existing fleet units, but the industry is being hit with a “double whammy” of sorts in the labor market, says Vise.

Not only does trucking compete in the job market with industries like construction and manufacturing, those sectors are also key freight producers. “Between them, those sectors have added a number of jobs equivalent to 37 percent of the entire payroll of trucking,” he says. “And they’re the two most important sectors for freight demand. So it’s a double whammy in the driver shortage arena.” 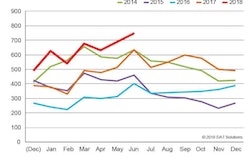