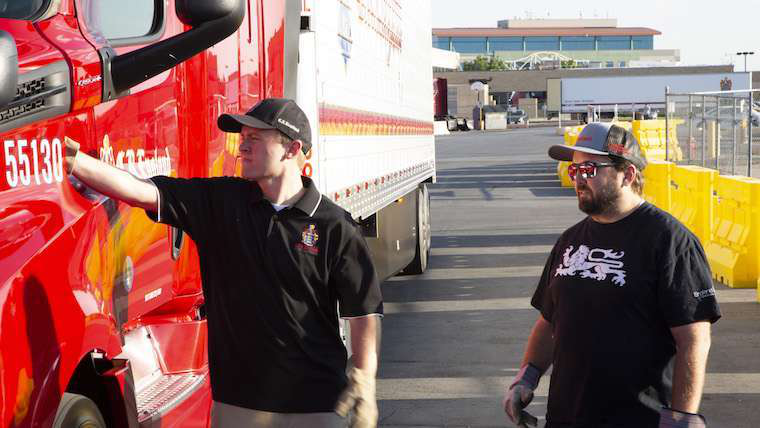 Executives, managers and other non-driving employees at C.R. England have been completing CDL training to gain a better perspective on what the fleet’s truck drivers experience on a daily basis.

The idea to have executives and other non-driving employees complete CDL training came from Chad England, the fleet’s chief executive officer. He went through the fleet’s in-house CDL training himself in the late 90s and has been driving off and on ever since.

England says driving is in his genes. He, his grandparents, parents and brothers all drove and/or have their CDLs. His driving experience has helped him with decision-making in meetings because he says he has a better perspective of what drivers go through.

“It occurred to me that it would be better if more than just a few of us, if all of the management here, really could see it from the driver’s eyes because this business looks a heck of a lot different when you’re in the office and when you’re behind the wheel,” England said. “So we did that.”

In 2017, England asked every executive at C.R. England who did not already have a CDL to go through training and obtain theirs. The opportunity to learn how to drive trucks is available to all of the fleet’s non-driving employees, England said, and he’s looking at requiring certain additional driver-facing positions to obtain CDLs.

“For drivers, I hope they know that we’re going beyond just listening. We’re actually experiencing what they are, and therefore we’ll make decisions that will be in their best interest,” England said.

England wants managers and non-driving employees who undergo driver training to walk away from the experience with an increased understanding for what truck drivers experience.

“You have to be safe. You have to be committed to serving our customers and especially respecting others on the road. I think that’s an insight I want them to learn, and that they are learning, as they go through this process,” England said.

Once they’ve undergone their training and have their CDLs, executives continue to go out for regular runs. The fleet has already implemented some company-wide changes based on executives’ experience over the road, including recently increasing the fleet’s governed truck speed to 65 miles per hour.