Drivers along the Florida Turnpike near Yeehaw Junction the morning of June 16 were witnesses to history, and most probably didn’t even know it.

Early that morning – for 9.4 miles – Starsky Robotics became the first company to test a completely unmanned vehicle at highway speeds on a public road alongside traffic when a remote driver sitting behind a bank of screens 200 miles away navigated a Volvo VNL, towing an unloaded trailer, onto the highway from a rest stop before ceding control of the rig to an onboard suite of sensors and software.

“We beat Waymo. We beat all the big OEMs. We’ve beat just about the whole industry,” says Stefan Seltz-Axmacher, founder and CEO of the San Francisco based start-up.

Starsky’s strategy for autonomous trucking includes a human driver that handles the first and last mile from a remote location, while letting technology – like software and a combination of radar and camera sensors – handle the highway miles in between.

“We’ve been wholly focused on getting the safety driver out of the truck,” Seltz-Axmacher says, noting all prior autonomous truck testing had included a driver onboard to monitor the truck and its systems, ready to assume control at any given moment.

In the case of the June test run, the remote driver started the truck from a stopped position at a rest area and navigated on to the feeder road toward the highway. Once the truck reached 30 mph – and flanked by lead and follow spotter vehicles – the rig piloted itself, relying on a lane keep assist platform and adaptive cruise control.

Once traffic next to the truck passed, the remote operator initiated right lane change and simply monitored the truck for the next 9 miles at 55 mph before slowing the unit and having it exit the highway. He then made a U-turn and brought the truck to a stop.

Starsky has spent the last year conducting similar trials, Seltz-Axmacher says, in order to set last week’s test up for “an incredibly high-level of statistical certainly that everything would go smoothly.” The company’s test team, he adds, had been driving the route heavily for the last two months with a safety driver onboard.

“The only thing we really learned [during the June 16 test] is that our truck really works without a person in it,” Seltz-Axmacher says, noting the run was the culmination of a year’s worth of work validating the system for just such a test.

The early morning trip was conducted under near-perfect weather conditions and in light traffic. In the coming months, Starsky Robotics will kick off a hardware revision and plans replicate the test with the new and more robust system before focusing on similar, more frequent, tests over longer runs that include hauling paying freight. Next up will be navigating in more challenging weather and more dense traffic.

“This was the first of a number of unmanned tests,” Seltz-Axmacher says. “There’s always going to be the rate of continuous improvement.”

Starsky Robotics completed its longest end-to-end autonomous trip on record in September 2017, hauling Hurricane Irma recovery aid 68 miles through Florida with a person in the cab but without their intervention. Two months later, the company made a 7 mile low-speed bobtail jog down a Florida road without a safety driver. 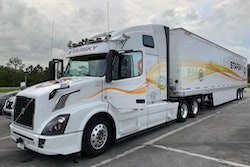 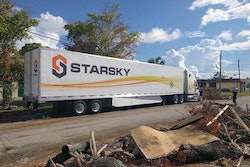