Two and a half years into the industry’s transition to a new generation of engine lubricants, Petro-Canada Lubricants says it has fully phased in the most current engine oils — CK-4 and FA-4 products — and that its customers are seeing benefits like longer drain intervals and potential for better fuel economy.

The company’s updated Duron line of heavy-duty engine oils has “proven to be very successful,” says Barnaby Ngai, category manager for Petro-Canada Lubricants’ heavy-duty products, in a media event held adjacent to the Honda Indy Toronto Indycar series race. The CK-4 and FA-4 products, which replace the prior CJ-4 lubricants, offer better protection against sheering and oxidation compared to their predecessor, which help lead to the extended oil drain intervals.

Ngai says the company has transitioned its entire customer base to either CK-4 or FA-4 lubricants. As expected, CK-4 oils, which are backwards compatible and more of a direct replacement for CJ-4 products, are the more predominant. Petro-Canada provides CK-4 oils in its Duron line in grades like 15W-40 and 5W-40.

Offering a lower viscosity — that is, thinner grades like 10W-30s — FA-4 products are meant to help boost fuel economy, in addition to the better resilience against oxidation and sheering compared to prior generations of lubricants. However, FA-4 oils are intended for use in newer engines, and because of fleet-make-up and OEM recommendations, adoption rate of the FA-4 oils has been slow.

Nonetheless, says Ngai, fleets that have switched to Duron FA-4 products are “absolutely seeing the performance we expect,” in terms of fuel economy and extended drain intervals. “The fear or concern” that the trade-off for fuel economy comes at the expense of engine wear, says Ngai, “100% is not the case,” noting FA-4 products offer the same protection as CK-4 oils.

The company pointed to oil analysis testing of its products performed in conjunction with partner fleets. In tests of an FA-4 oil with a fleet running Freightliner tractors with Detroit Diesel DD16 engines, Petro-Canada says it was able to push oil drain intervals from 75,000 kilometers to 100,000 kilometers — about 15,000 miles. Even at those extended drains, measurements of oil acidity and wear metals were still well below condemnable limits.

The company’s also offering this type of oil diagnostics to all of its customers, via its Lube360 platform. Fleets running PetroCanada products can see oil analysis, get info on whether they can extend oil drain intervals and more.

Ron  LeBlanc, senior technical services advisor, says the company also can perform on-site fleet analysis to help guide customers toward the right products and the proper oil drain intervals. “This is a complex business,” LeBlanc says. “It’s not just about lubricants. It’s about support after the sale. Our technical service team adds that value.”

What’s more, the company has already begun work on formulating — and testing — even lower viscosity oils, such as 0w-20 grades, to see if it can push fuel economy further without sacrificing engine wear.

The company has two products in testing, in conjunction with OEMs. “We’re still in the early stages, but so far it’s going well,” says Pettingill. “We’re asking ‘How long can we go in viscosity?'”

Ngai says once the company has accumulated enough test miles of the products, it can share details of the tests. “It’s exciting because you don’t see this type of product in the market today,” he says. “0W-20 is kind of passenger car motor oil language. But we’re talking about in heavy-duty.” 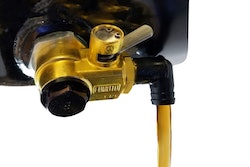 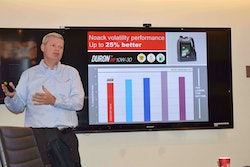 Petro-Canada: Roll out of next-gen Duron lubricants ‘a complete success’ 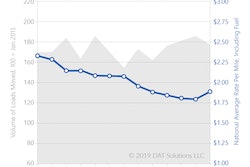 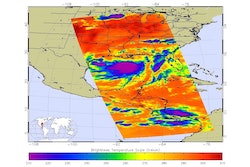