While praised for cutting emissions and improving cetane levels, another incentive that may draw fleets to renewable and biodiesel is the potential rise in ultra-low sulfur diesel (ULSD) prices this year brought on by mandated maritime use.

The International Maritime Organization (IMO) ruled that starting on Jan. 1 vessels traveling in international waters would have to reduce sulfur emissions by more than 80%. Increased demands on ULSD used in on-highway diesel engines are expected to put upward pressure on prices.

According to the U.S. Energy Information Administration, on-highway diesel prices from Dec. 23 to Jan. 6 rose an average of three cents per gallon across the U.S., and the North American Council for Freight Efficiency anticipates a 25 to 50 cent per gallon uptick this year owed to the IMO rule.

But there could be some ways around it — especially for fleets operating in incentive-rich California.

Ruan Transportation, which began using a blend of renewable and biodiesel from Renewable Energy Group early last year, sees their new fuel not only as a minimally intrusive solution for lowering emissions, but also as a possible hedge against ULSD price increases brought on by international factors and the IMO’s new low sulfur requirement.

“Everybody’s watching that. IMO 2020 is upon us and I totally agree,” Steve Larsen, Ruan’s director of procurement and fuel, said when asked if renewable and biodiesel could help defray rising ULSD costs. “This is another way to help offset some of that demand with other stocks and things that aren’t as susceptible to the same geo-political forces as well as just demand ripples and waves.”

Larsen said the variety of feedstocks that REG uses in its bio-fuels further helps to minimize market disruptions. Ruan uses REG Ultra Clean Diesel, which is blended with 80% renewable diesel and 20% biodiesel.

“I can’t speak for everyone in the industry but REG has been pretty strong with the ability to use a wide range of feedstocks so that you’re not tied into any one particular feedstock that could have a disruption in its own supply that could turn around and impact us and the end-consumers,” Larsen explained. “That helps us to feel confident that the supply should be fairly steady. Now granted the demand for renewable diesel may outstrip supply in many cases. That feedstock supply gives us a lot more comfort than if it was a lot more limited.”

Renewable diesel is nothing new. When faced with increased oil embargos, Germany developed its own renewable diesel plants in World War II, which fueled its war efforts.

Production costs are notably higher versus petroleum-based fuels, so historically renewable diesel hasn’t been able to compete with conventional diesel unless, as noted during the past few years in California, it’s supported by government subsidies tied to emissions concerns.

The Low Carbon Fuel Standard Program in the Golden State has made renewable and bio diesel increasingly popular there where well-funded incentives have dropped prices on par or below conventional ULSD.

“It’s a favorable price,” Larsen said. “And a lot of that has to do with LCFS and the way California structures incentives and things like that.”

Ruan has around 80 trucks running regularly on REG Ultra Clean Diesel in California’s Central Valley area. Another 50 or so trucks use it when they pass through. Trucks hail from a variety of manufacturers with none having anything larger than a 13-liter engine. The trucks primarily run between dairy farms and processing plants.

Ruan, which has a history of using a variety of alternative fuels and is currently pursuing electrification, was approached by REG to begin using so-called ultra clean diesel. Increased scarcity of renewable diesel brought on by growing demand makes it ideal to mix with biodiesel which not only helps to fuel more trucks, but also adds the benefits of biodiesel, which includes greater lubricity, lower hydrocarbons, lower particulate matter and lower carbon monoxide (see REG fuel comparison chart above).

However, a little over four years ago, renewable diesel received a big boost in California, which shows no signs of stopping. In late 2015, the state announced that it would be fueling its fleet with renewable diesel. Several cities followed suit, though a few, including Beverly Hills and Oakland, had been using the fuel prior to the state’s adoption.

In the years following, the uptick in demand for renewable diesel has continued with major players including Shell, Phillips 66 and 76 getting into the mix.

Fuel recycler Next Renewable Fuels announced last year that Shell would purchase renewable diesel from its new fuel plant, which is scheduled to open in northern Oregon in 2021.

Longtime fuel retailer 76 has been offering renewable diesel at its pumps in northern California.

According to REG, combining renewable diesel with biodiesel has proven to be a winning combination for fleets and fuel suppliers in California.

“The economics have been better for us and for drivers, we’ve heard no complaints about performance and it’s good for the environment,” Fontana Truck Stop Center general manager Abdul Mardini said via statement. “Also, there’s a lot of demand for renewable diesel in California. By blending it with 20% biodiesel, we can expand our supplies of RD.”

While produced from the same animal and plant feedstocks, processing is what sets renewable and biodiesel apart. Renewable diesel refinement includes hydrotreating, which is used in petroleum-based production. The process leads to lower emissions, higher cetane values and a lower cloud point, which paves the way for a diesel pipeline winter spec. Renewable diesel users have praised the fuel for overcoming gelling and phase separation issues common to biodiesel.

Neste, the world’s largest producer of renewable diesel, reports that its fuel can reduce greenhouse gas emissions by up to 80% when compared to conventional diesel.

Biodiesel, which is frequently confused with renewable diesel, is produced through transesterification where the feedstock is reacted with methanol to produce fatty acid methyl esters. Increased lubricity, absent in ULSD and renewable diesel, is one of its benefits in addition to lower emissions. However, unlike renewable diesel, biodiesel is not offered in a 100% solution. It is mixed with either conventional or renewable diesel in blends that are limited to 20% biodiesel.

Besides being combined together, renewable and biodiesel blends can be mixed with conventional diesel in varying degrees. Some fleets prefer to use 100% renewable diesel, such as the city fleets in Beverly Hills and Oakland, Calif.

“After switching to Neste MY, we noticed that our fuel systems were very clean, even cleaner than they had been while using ULSD,” Crowder said. “Our DPFs (diesel particulate filters) were performing better, and annual maintenance was simple and efficient. Our trucks had improved performance, better power and less smoke emission.”

Larsen said that Ruan has not experienced any phase separation issues in their bulk tanks with blended REG Ultra Clean Diesel.

“The biodiesel itself, the B20 portion, provides lubricity that helps throughout the engine,” Larsen said. “In terms of performance, we’ve not had any disruptions whatsoever to operations. I’ve also confirmed that there’s been no real issues at all tank-wise and things like that. The main thing for a company considering a conversion, you shouldn’t really have any issues so long as your bulk tank has been well-maintained and fairly clean. You still want to watch for filter issues right at conversion, but really it’s been great.”

Larsen said Ruan’s use of REG Ultra Clean Diesel not only increases its green footprint but can also prove more attractive to shippers who are becoming increasingly conscious of emissions.

“The other thing to have fleets keep in mind, shippers want to know that you’re a sustainably minded fleet. You do what you can to help in that area and I think this is just another way that’s easy to enter into that accomplishes that,” Larsen explained. “Not only does that intrinsically help emissions it also presents your company as somebody who just may be more appealing to shippers when they’re considering all the different fleets that they could choose to partner with.” 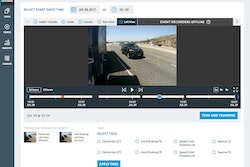 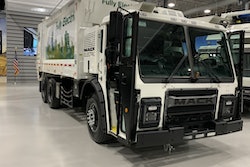