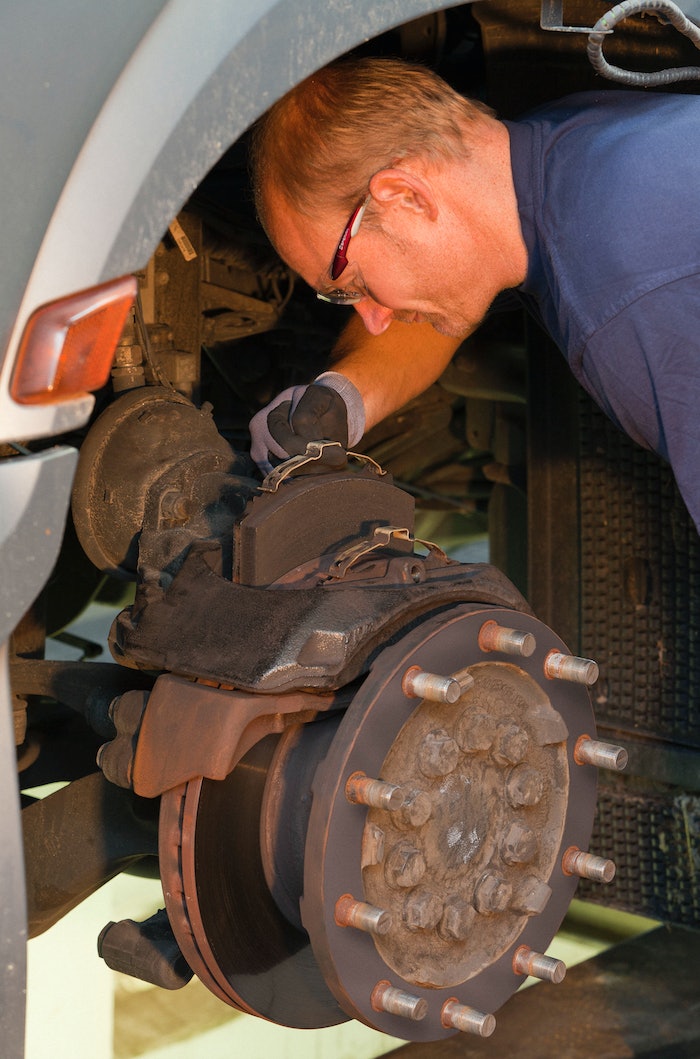 Wabco recommends making the most of COVID downtime with thorough brake inspections.

Effective with the coming year, brake manufacturers will be required to reduce the amount of copper used in their friction material to meet the copper-free brake pad agreement reached in 2015 between the U.S. Environmental Protection Agency, California and Washington State, and industry representatives.

The agreement calls for reducing the amount of copper used in brake pads to less than 5% by weight (B-Level) on Jan. 1, 2021, and 0.5% (N-Level) by Jan. 1, 2025. Copper, the EPA said, is a primary pollutant of concern found in highway stormwater runoff, impacting aquatic life and water quality. The initiative also reduces mercury, lead, cadmium, asbestiform fibers and chromium-six salts in brake pads.

Because copper generally is softer, it impacts rotor wear to a lesser degree than other metals, said Keith McComsey, director of Air Disc Brake & Systems for Bendix. “The reduction in copper for future pad formulations will have to be replaced with other materials that do a similar job without adversely affecting the pad friction performance,” he said.

Joe Kay, director of Brake Engineering for Meritor, said a brake’s friction formula has many compounds that make up a sophisticated recipe. Copper replacement in brake pads remains a topic of ongoing research, and many of the replacement materials and approaches to formulations are proprietary.

“There is actually one metal that can act as a substitute for copper, and that is silver,” Wohltmann said, “but this is not a cost-effective solution.”

The one constant that all manufacturers face is that stopping distance laws have not changed. New materials with reduced or no copper must meet current laws, and those updates will need to come without sacrificing component life.

“Wear and life of new pad materials will be dictated by new ingredients replacing copper,” Dharaiya said. “Apart from formulations, wear life is always subject to a variety of factors, such as driving habits, environmental conditions, duty cycle and tractor-trailer brake combination, among others.”

Copper is typically substituted by iron, Wohltmann said, as it is the cheapest metallic material available with reasonably comparable physical properties. However, he said it is not a direct one-to-one substitution, as simply replacing the copper with iron provides insufficient performance in wear rates and stopping distances.

“To try to maintain the level of performance of copper-based friction, the entire formulation of a low- or no-copper brake pad must evolve, for instance, by also utilizing a more complex group of materials for the lubricants and modifiers,” he said. “In short, copper removal is a cocktail of complex problems and countermeasures.”

“Drum brakes absorb and dissipate a much smaller amount of heat energy per unit area of available friction patch, which makes it more feasible for drum brake linings to be produced with little to no copper,” he said.

“Drum frictions typically were classified as non-asbestos organic frictions (NAO), which came at a reduced copper level,” McComsey added. “There are some semi-metallic frictions used to meet current levels, but [they] might need to be reformulated to meet the N-Level friction compliance for 2025.”

Even though only two West Coast states are tied to the agreement, brake manufacturers will have to roll out compliant friction material nationwide to avoid having brakes that are compliant only in select states.

McComsey said Bendix air disc brake (ADB) pad offerings that meet the current mandate for B-Level friction will be used in all ADB configurations in North America, adding that “we will also support the aftermarket in the same manner.” The A-Level frictions that once were available prior to Jan. 1, 2021, will be obsoleted and replaced with B-Level equivalent pads for both OES and AM replacement pad kits. The company also is actively developing friction material for its ADBs to meet N-Level friction by its implementation date four years from now.

Randy Petresh, vice president of technical services for Haldex, said the company will similarly introduce its revised material formulations on a national basis, not state-specific, and would meet both B- and N-Level deadlines.

N-level friction for all Meritor disc brake products – EX+LS, EX+L, EX+H and Quadraulic – will be 2025 copper-compliant by the end of this year, including MA9300, MA9500 and MA704, for truck and trailer applications.

“Meritor will convert to N-Level formulas as the only offering,” Kay said. “Formulas meeting the N-Level friction make it simpler for the vehicle OEMs and also aftermarket parts. We prefer to make it easier for our customers to keep them compliant no matter where their vehicle is purchased, used and service conducted on them.”