At the time, the Salt Lake City-based refrigerated carrier had been shopping around for a new business intelligence system for its office staff to “better support our drivers, particularly our new drivers,” says Chad England, chief executive.

England hired Pam Wilson as vice president of process development to lead this effort. Her first few months on the job were not spent in the office, however. First, Wilson called driver recruiting and registered for C.R. England’s driving school.

She entered the classroom the next Monday at 6 a.m. and was known only as “Pam” to the instructors, trainers and other drivers she met. She explained to those who asked that her purpose for getting a commercial driver’s license and driving experience was to start a trucking company.

“Chad had not told me what to expect,” Wilson says. “He gave me no frame of reference so it would be as authentic as possible.”

Putting executives through CDL training is not a new practice at C.R. England, but Wilson was its first undercover agent.

“I feel very strongly that our top leadership needs to be in touch with what is going on,” says England, a fourth-generation owner of the family business. “All of our executives have CDLs and get out on the road regularly. The unique thing about Pam is she was new to the company. This was an opportunity to get a fresh viewpoint.”

C.R. England’s CDL schools and training program are a gateway for drivers to enter the trucking industry from all walks of life. Its over-the-road division accounts for about 80 percent of drivers in the company’s fleet, and the large majority of its OTR drivers are in the process of completing the company’s 90-day training program after they have earned a CDL.

“If we can retain that group [of drivers], it dramatically affects the whole company,” Wilson says.

Wilson went through the entire training process. The most difficult period was her first week after earning a CDL. She was paired with a trainer on a 2,500-mile round trip to the East.

Driving 10 hours straight and then trying to sleep in a bunk while in motion, day after day, were among the experiences that teach executives empathy for drivers. When talking to drivers, Wilson also learned that many lack support systems outside of work.

“The majority of people do not have any safety nets,” she says. “I found a love for people who sacrificed so much to come here and live their last hope. They put all their trust into C.R. England or whatever trucking company they choose.”

Each week, Wilson snuck into the office to meet with Chad England and report on her findings. One day on the driving range, she called him to confess that she had backed into an object.

“I had to call Chad England and tell him I wrecked his truck,” she jokes.

Last January, Wilson came off the road and entered the office. She went to work on the front lines fielding calls from drivers in training.

That same month, C.R. England had set a goal to reduce its driver turnover by half before yearend. The goal was set within the management program the company uses from Franklin Covey called the 4 Disciplines of Execution (4DX).

To accomplish this goal, C.R. England needed a better way to manage tasks that impact driver retention. Employees who interact with drivers had been writing tasks on random pieces of paper to organize their work, Wilson says.

“We had no way to organize our tasks,” she says. “This is how you fail drivers. They call and are upset, and then we escalate that. We have to start resolving the core issue.”

Wilson says her experience as a mother and a career in sales, managing call centers and training business executives all came into play for creating new processes to better support C.R. England’s drivers.

She previously had developed a program to manage the qualitative factors of human interactions in a call center environment. She adapted this program to the trucking industry. On a basic level, the program involves the use of metrics, a feedback loop and training people how to treat drivers, she says.

C.R. England began to implement the new business intelligence system it had selected, but the project was large in scope. In the meantime, Wilson created a tasking system using Microsoft Teams with various add-ons to bring visibility to the new call center process.

Employees benefited from using the tasking system before the company’s new BI software from Pega Systems will automate a lot of the work, she says.

“When you have a more holistic view, you are actually much better at the job,” she says. “They are going to have an understanding that makes them so much more well-rounded and suited for other positions since they have been trained this way.”

Empathy is the main cog in the workflow. One of the most important steps that employees are trained on is how to “clear the path” to determine the core problem by asking unearthing questions.

Employees are graded on their call performances through a feedback loop with relevant and accurate data that contributes to their job success, Wilson says.

“We don’t pull any number unless they have control over it,” she says.

Each data point has specific actions and consequences. As part of the feedback loop, employees view reports that detail the number of calls that come in and went out, and how many of the tasks that came in were completed. They also see how they scored on calls. Wilson grades three random calls per week for each employee.

The scores for all employees are updated every morning, and on a weekly basis the daily numbers are reviewed individually with employees. “They have to tell me how they are being exceptional in each one of those steps,” she says.

Being exceptional in each step of the workflow is not as difficult as it might seem. Wilson says that the difference between average and exceptional does not need to be much — only by one degree.

She cites a study that found businesses will retain a customer 80 percent or more of the time if the customer has an emotional exchange. The 80 percent retention rate stays constant regardless if the exchange is one degree or 100 degrees better than average.

Before working in the trucking industry, Wilson believed the “one degree exceptional” rule was the same for any type of business. She’s changed her mind.

“We have an advantage in trucking,” she says. “We serve people who aren’t serviced very well. I’m always amazed by what the smallest amount of empathy shown to drivers does.”

On the other hand, if you create trust with a driver and then break it, “that could swing just as far the other way, because they have 10 hours a day to think about it,” Wilson says.

The driver call center processes and technology that C.R. England put in place in January showed immediate results. By April – after only three months – the company already had reached its annual 4DX goal to reduce driver turnover by half.

“If you support your people, and you make sure you go to extra lengths to find ways to make them happy and productive, it will pay off,” England says. 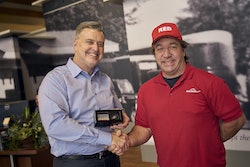 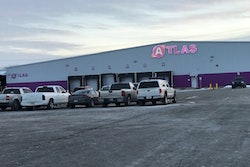 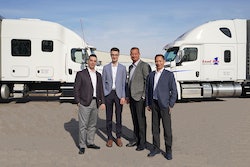 2019 Innovator of the Year: Load One — Bolting on applications